OK, we're all seeing it in various research settings - there's something going on among teens, 18-24s and Classic Rock. But then again, many of you don't need research because you have kids who are spending more time listening to Led Zeppelin than they do 50 Cent or Godsmack. So what's the deal? Here are some reasons: 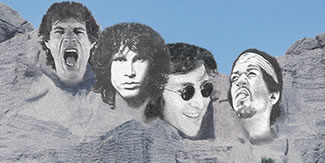 For the first time since we created this format in the early '80s, I'm actually beginning to feel there's opportunity to expand the audience - from the younger end. Think about a promotion this summer where stations cut deals with concert promoters where the Classic Rock parent pays full price for a ticket and his/her kid gets in free or for half price. "Take Your Kid to a Classic Rock Show." It'll sell tickets, and more importantly, begin to build that bridge to attracting a new Gen Y audience.

Agree? Disagree? Or somewhere in the middle? Use this space to let us know your thoughts.

I've noticed in my own home that almost everytime a classic rock tune comes up on a tv spot or in the soundtrack of a movie - my 3rd grade/8 year old son usually turns to me and says "hey Dad, thats a song that your radio station plays".

While he's obviously exposed to the station when he's in the car with me, he's also doing lots of listening on his own...his bedroom radio 9 times out of 10 is tuned to classic rock.

I did ask him why he doesn't listen to the CHR that I also oversee - and he also hears in the car - he says he just doesn't like all the "rap and hip hop" on that station.

Its a real magical feeling when your 8-year old is in the backseat singing along when "Rock 'N Me" by Steve Miller is playing on the radio.