JacoBlog - Jacobs Media's Blog: To Text Or Not To Text

To Text Or Not To Text 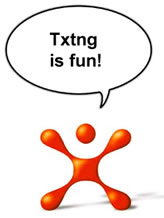 OK, I'll admit it.  I've been slow to come around to the text messaging phenomenon.  But Jacobs Media's Technology Web Poll is a reason to rethink this technology.  Yes, texting is the domain of the young, but like so many other media habits, it eventually becomes widespread.  Think about IMing.  Just a few years ago, it was the province of teenage girls.  Today, our poll shows that nearly half of Rock Radio listeners are busily IMing on at least a weekly basis.
Texting may end up in a similar boat.  A key will be for radio to figure out the best way to apply it.  We asked follow-up questions about the types of things that listeners might like to receive in text messages from stations.  Some want information, while others simply want to win prizes.  Of course, there's a large group that would prefer to simply text with friends.
Recently, an example of creative texting occurred at a concert, of all places.  The source?  Bono, of course, the smartest technophile in the Rock community.  During a concert in San Jose, Bono devoted some time to human rights, and then asked everyone to grab their cell phones and text in a number that would automatically add their names to a petition dedicated to improving human rights around the world.  There's obviously a "permission" component here, but it opens up the possibilities to create text applications.
Keep an open mind here, and let's continue to dialogue about texting in ways that both stations and the audience can benefit from.

Why do you all wait for "Your Research" to tell you what is up... As a consultant and forward thinker don't you "think" you would of seen IMing as becoming mainstream, and texting has been around for 5 years and used by your so-called "Target Market" for the last 3 years. So basically I look at you all being at least 3 years behind, maybe that says the same for Corporate Radio. Did you know the kids have color tv's and running water