The Doors Sell Out...

...And it probably happened a little late in the game.  For the first time in nearly four decades of existence, The Doors catalog is finally open to ad agencies for products, TV, film, and soundtracks.

But, there's a story that's not being told.  Of course, everyone knows about the success that Cadillac has reaped with its use of Led Zeppelin's "Rock and Roll" - the song relaunched their tired brand and has helped to persuade younger demos that Caddies aren't just for AARP members.  Just a few years ago, the average age of a guy walking into a Cadillac dealership was 63. 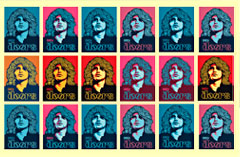 The part you may not know is that "Rock and Roll" was not Cadillac's first choice.  The song they really wanted was The Doors' "Break On Through."  But, at the time, they were unable to do business with the band, and thus, took their money to Page and Plant.  Of course, the part of the campaign that remained was its original slogan, "Break Through."  (Footnote:  "Rock and Roll" was the first time that Led Zeppelin allowed the commercial use of its songs!)
Using great Classic Rock songs for soundtracks doesn't demean the music.  Tied in with the right brand (or film or TV show or whatever), it can actually breathe life into an old song, reintroduce it to a whole new generation of consumers, and of course, make lots of money for the band.  My question is, which brand will buy the rights to "Peace Frog?"

Incorrect. Artists licensing their music to commercials DOES demean the song.

The process can sell a burnish the advertiser's brand plus sell a ton of CDs, but it also most definitely adds a layer of meaning to song and artist which can ultimately be damaging to both. Such a TV commercial often functions as a music video for the song, one over which the musician(s) involved do not generally have creative control.

Simply because licensing can make "lots of money" for the band does not mean that it's not also demeaning to the song.

At least Barry Manilow was was upfront about his status as a jingle composer.