Today we've got another guest blog from Paul Jacobs: 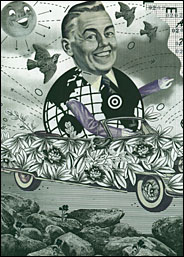 Are there parallels between what's going on in the domestic automobile industry and radio?  An article in last Sunday's New York Times chides Detroit for its inability to respond to changing consumer demand, primarily in the area of new technology in the form of hybrid vehicles.  The author makes the case that Detroit has actually been fighting against change, while missing a prime opportunity to retool its image in a more contemporary light.  The result is that Detroit is viewed as a culture that "grinds out well-made, but ho-hum vehicles and offers them at huge discounts."

The parallels to radio?  Well, a scan of any newspaper or magazine positions radio in much the same light.  We're described as providing the same old product and our key selling point against satellite radio is that we're free.  Despite our obvious assets, radio is viewed as being slow to embrace technology and bring the kind of excitement to our industry that our new tech competitors like satellite radio and iPods are currently enjoying.  Every time a new tech toy or delivery mechanisim like Podcasting comes into vogue, radio's image as a Chevy Cavalier congeals.

As someone who lives in Detroit and has to live with continuous wisecracks that are patently false (believe me, this place is better than you think, otherwise we wouldn't live here), it hurts to see radio suffer the same fate.  If you watched the All-Star Game earlier this month you probably didn't believe your eyes.   Does radio have a similar PR problem?  Absolutely, and in this space we have continually encouraged the leaders of our business to counter XM's and Sirius' multiple Public Relations firms with a dozen or so of our own.  But we also have a sizzle problem, just like Detroit.  It would be a crime if radio continues to suffer the same fate as the Motor City.  At this year's NAB, let's hope that the mavens of our industry address the problem head on, and we can begin to turn it around.