The other day I was driving my wife’s car when my six-year-old, who is working on her reading, asked me: “Dad is this song by a group called ‘HOOBASTA’?”

As you might imagine, I was briefly puzzled by that question.  Where did that come from?

You see, my car does not have RDS and my wife’s car does.   I looked down at the radio and there it was: “HOOBASTA.”

“No, actually the group is called HOOBASTANK.” ("Please," I thought to myself, "don’t ask me what that means").  “The NK will come up in a second on the screen.”  Sure enough, a few seconds later the little screen on the radio said nothing more than “NK”.

So I have decided to perform some content analysis of RDS on stations that I can receive here in central New Jersey.  And I can sum up the usage of RDS by some of America’s highest billing and most successful radio stations in one word:

Oops.  That word is nine letters long!  Can’t spell that one!

RDS holds great promise for “terrestrial” radio.  But clearly it is being delegated to the assistant engineer, who really doesn’t understand the branding opportunity it holds for radio in its newly competitive environment.

On one 90-minute drive on a Sunday morning I observed the following:

As proof of what an afterthought RDS appears to be for radio people, during one very high-profile format change that happened in New York recently, the RDS continued to display the old name of the station for the better part of a week. 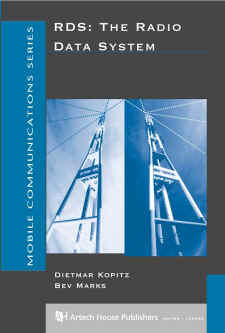 There are a few stations putting some evident thought into how RDS should work.  But even the good ones seem to have things like: WHEREVER / YOU WILL / GO THE / CALLING.  Try to figure out what’s the name of the song and what’s the artist, unless you otherwise know.

Getting the most out of RDS should not overly tax your station’s resources.  When a song is entered into the system, someone needs to think about what is on the little screen.  There is a hyphen available; if we really must let’s make it HOOBA- / -STANK.

RDS is primarily a branding opportunity for your station.  One could argue that transmitting bizarre or bad information, then, only damages the brand.  We should consider whether the title and artist info is hurting more than it is helping.

A recent article in the Wall Street Journal discussed how one foundering airline proposed only cleaning the cabins at the end of the day (and not between flights) in order to save costs.  The marketing guy correctly killed that idea, noting that if people see dirty cabin interiors they will assume that the engines are not being maintained either – and may just stop flying the airline altogether.

Right now, RDS is one of radio’s “dirty cabins.” It is hurting the image of our industry at a time when we can least afford it.  The good news is we can clean this little problem up at almost no cost.