How can one of the most popular golfers on the PGA Tour be a guy who hardly ever wins a tournament?  That's the engima that is John Daly, a pro golfer who has fought alcohol addiction for years, has been married four times, and who always seems to be teetering on one edge or another.

So why is a guy who fails more often than he succeeds more popular than golfers who consistenly come in first or second on the tour?  How come Daly is more relatable to the average golfer than the Michael Jordan of the sport - Tiger Woods?

Because golf fans admire and connect with Daly's flaws.  He's a human being, with all the scars that many of us carry around.  And in contrast to other members of the PGA Tour, Daly is real.  As Daly himself pointed out in a recent New York Times piece, too many pro golfers refuse to show their personal sides, acting more like robots than athletes who have fun on the course. 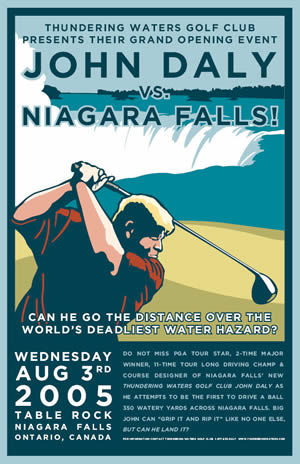 That's why Daly would make a great morning guy, and why his personality is something that radio programmers ought to take note of.  Daly is real, human, flawed, and resilient.  Last year, he led all golfers in a weird stat - the "bounceback."  It's shows how often a golfer follows up a bogie with a birdie.  It's what made Bill Clinton so maddeningly attractive to Americans - he continued to recover and thrive after each disaster.

Daly isn't afraid of doing stupid things.  In "Jackass" style, he once tried to drive a ball over Niagara Falls.  He openly smokes on the course, and is the epitome of anti-establishment in a sport that is all about how you look and how you act.

Radio needs more guys like John Daly, who prove that popularity goes well beyond consistency and even skill level.  Daly's imperfections - his human side - is what makes him endearing, in contrast to the machine-like consistency of golfers like Tiger Woods or Vijay Singh.

These are the elements that originaly made Howard Stern, Brother Wease, and Steve Dahl so endearing.  They were "everyman" - flaws and all - and in the process, proved to be approachable, relatable, and magnetic.  Where's the next generation going to come from in an industry that would rather save a few bucks on voicetracking?

One of my favorite Daly comments recently was "I'm in great shape for the shape I'm in." He's probably 70 lbs. overweight but could care less. Love it.

A true golf treasure he is.