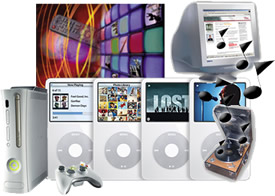 It's hard to imagine how switftly things are moving technologically.  In the blink of an eye, Apple introduces the video iPod, and ABC makes some of its prime time programming available for download for $1.99. Now NBC and CBS are initiating video on demand ventures of their own.  It's like ringtones - if you have content, consumers are showing signs that they'll pay for it and download it.

Which brings us to radio.  We very much need to participate.  We cannot take part in satellite radio, for example, but we are theoretically in a great position for podcasting and Internet streaming.  That is, if we have vision and the content to support it.  NPR is proving that listeners value their content.

So what's the story for commercial radio?  We're now taking risks.  You can think any way you want about Infinity's storied experiment in the post-Howard Stern apocalypse.  But at least they're innovating, taking risks, and generally have pursued less-traveled paths.  It would have been easy to simply populate Stern stations with tried-and-true morning talent because it's out there.  But with the exception of Rover, they have elected to go the more difficult route.

But if it was only about risk-taking, anyone could do it.  Developing content requires R&D, writing, hiring great programmers and letting them ply their craft, and creating an environment where experimentation is welcome.  Waiting for the next Howard Stern to happen could take a long time.  It's like how the record labels have been waiting for the next Beatles, Madonna, or Nirvana.  Just wishing won't make it so.

We can keep nodding our heads every time someone says that "Content is king," but until we're willing to make the investment in time, expertise, talent, and money, all of this wonderful technology will indeed pass us right by.