Classic Rock For The Kids 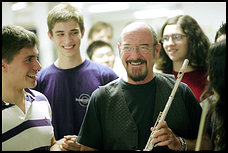 So, the Washington Post has figured out what we've known for years - Classic Rock isn't just for old farts.  In fact, there's clearly an audience movement that's highly supportive of the music that belies age and other demography.  Teenagers and twentysomethings have found Classic Rock, through a combination of TV commercials, movie soundtracks, their relentless Baby Boomer parents, and simply self-discovery.  Just witness the success of Thomas Jefferson High School's "Classic Rock Appreciation Club." (see picture of Jethro Tull's Ian Anderson hanging with the kids)

A couple of summers ago, we suggested a concert promotion - "Take Your Kid to a Classic Rock Concert" - where concert promoters would discount tickets so that parents could take their children to slow selling concerts.  It's a natural.

You can make the case that new music isn't as good as it used to be.  But perhaps the explanation is simpler than all that.  Perhaps it comes down to the plain fact that this music is the greatest rock ever made - an opinion that has become more obvious to Generation Y.  Go figure.

A great piece of reading for any classic rock station's programming and sales staff...thanks again for sharing...

I increasingly think that there is another factor at play here -- most Classic Rock sounds nothing like most New Rock. CR is vastly more melodic and softer on the whole. Maybe the belief that as time goes by we must rock harder and harder to be legitimate New Rockers is misguided. If one likes the sounds of Classic Rock, the new music that is more "similar" in sound is often actually Modern AC or, believe it or not, Country.