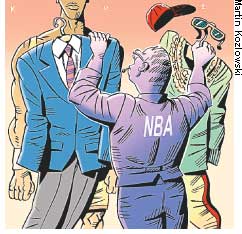 One of the big stories in the NBA in the preseason had nothing to do with the game itself.  The big controversy facing the league and its well-paid players is the new dress code that NBA Commissioner David Stern has imposed.  No longer will the players be allowed to come and go from the games wearing retro jerseys, loud jewelry, sunglasses indoors, and other clothes the Commish believes runs counter to the league's image.

While many of the players are whining, Stern knows full well that NBA stars have perceptual issues with fans.  And he wants them to be more like reps than prima donnas.  Basketball is big business, and if it's going to grow and endure, the fan base needs to continue to pour dollars into a sport that has serious competition from other games and leagues, all vying for a piece of the pie.

The radio angle?  Our jocks - the people on the air - also need to overcome some image issues, and act like businesspeople.  A number of years ago, I was involved in a big New York City agency presentation.  Radio morning shows were at the center of the pitch, and it was clear that many of the agency types in the room didn't listen to a whole lot of radio.  Attempting (and succeeding) to marginalize radio, one of the senior agency execs asked, "Don't radio DJs run around with underwear on their heads?"  End of meeting.

We put a great deal of emphasis at the station level on promotional and sales appearances - our big chance to meet and greet the public, create traffic, sell some product, and make a positive impression.  Yet, so many stations have failed to implement a code of dress or conduct for these encounters.  When interacting with our two most important customers - clients and listeners - it make sense to run our stations like the businesses they aspire to be.