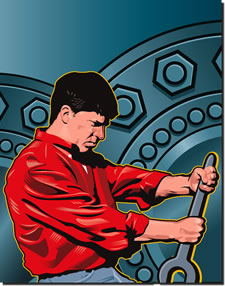 It's been a tough year for the radio business.  New media is getting all the headlines, revenue is off,  payola hearings have made the headlines, Howard Stern (and others) are leaving terrestrial radio for apparently greener ($$$) pastures, and it's getting tougher and tougher to find good salespeople.

So as the year winds down, it's easy to think about getting through the holidays, recharging the batteries, and fight the good fight again in '06.  Think again.

Just yesterday, Senator Ted Stevens (R-Alaska) held an indecency forum, featuring the Christian Coalition and  assorted media companies.  Who knows how these meetings will play out, but once again, the congressional turret continues to aim at our business.  It's noteworthy that all of the Stern Sirius advertising to date is focusing on how Howard will now be free to do the show he wants to do, unrestrained by the FCC and radio regulation.

Meanwhile in related news, college radio stations around the country are now finding their licenses challenged by Christian groups who sense an opening to wrest away these stations.  To date, none of these challenges has worked, but they are generating huge legal fees for college radio stations that are just trying to stay on the air.  Think you've had a tough year?

And if I sound like another whiner on the editorial page, all apologies.  But doesn't the Senate have a little more on its plate right now than yet another indecency investigation?  Isn't the nation facing considerably more important issues than whether Eva Longoria shows too much skin or morning DJs talk about who got lucky over the weekend?