Dude Of The Year 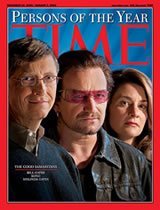 It is indeed wonderful to read that Time has named Bono (along with Bill and Melinda Gates) one of its "Persons of the Year."  It was just a few days ago in this space that we saluted Bono and U2 for their "brand/band management."  This honor now elevates the group to new levels, even above those rock stars that have been knighted by the Queen of England.

Bono's accomplishments have become legend, using his musical and celebrity powers to make the world a better place.  While the stereotypes of spoiled rockers revolve around drug and alcohol abuse, trashing hotel rooms, and throwing TVs into the pool, Bono sets a higher standard.  The Yiddish term is "mensch" - a way of saying that he's a good person whose heart and soul are always in the right place.

It has always been hard to find good examples of rock star behavior, especially for kids who treasure the music but see story after story of tragedy, stupidity, and excess on "Behind the Music."  Bono has risen above all that.