The Case For Passive Measurement

More and more, ratings companies and media mavens are coming to the same conclusions about measuring usage in an increasingly complicated and crowded marketplace: if you want to truly understand what consumers are exposed to, you'd better develop passive measurement systems.

Why has this become so important?  Because people have become so inundated with advertising, new media, technology, and clutter that they simply cannot recall the exposure they've had to the myriad of messages, information, and entertainment they encounter on a daily basis. 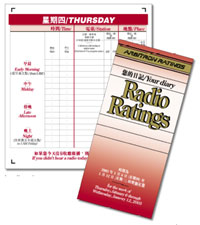 Remember the first time someone explained to you how an Arbitron diary worked?  The notion that listeners have to write down their listening in real time sounded unrealistic.  And when you figured out that the diary is simply a recall game, it probably occurred to you that top-of-mind recall trumped actual listening experiences, you begun to realize that real-time listening is something of a mirage.

In radio, we have simply come to accept the flaws.  We question the methodology (when we have bad books), but have otherwise come to accept that listeners can only write down what they remember.

This afternoon, I'm presenting the findings of a six focus group project that Arbitron commissioned during the early fall.  Among other things, we learned that the diary cannot keep up with all the audio information and entertainment that consumers are exposed to on a daily basis.  Even the eDiary - while technologically a step forward - suffers from the same flaws as its paper ancestor:  most people have to write down their listening before going online to record it in their "hi-tech diaries."  It looks cool, but in the end, suffers from the same deficiencies.

The idea of passive measurement - whether it's PPM or Nielsen's new Npod - is so much more in-sync with where it's all headed.  As we saw in our groups, most people can barely remember the media they encounter because it's coming at them from so many different angles and sources.

What's the Npod?  It's Nielsen's version of PPM for outdoor advertising.  If you drop the average person into Times Square, she is exposed to hundreds of messages and advertisements.  But if you expect her to recall them all, you're kidding yourself.  The Npod uses GPS technology to track where consumers go - then correlates those visits to outdoor advertising at those locations.

Yes, there's a leap of faith involved because the Npod doesn't measure whether the respondent actually saw the ads.  But the flip side is that consumers simply cannot recall all the outdoor messages they encounter.  The maiden Nielsen study in Chicago indicated that the average 18+ resident is exposed to 40 outdoor signs a day, which rises to 66 for those who are city dwellers.

And that takes us back to PPM, because the same basic phenomenon comes into play with Arbitron's new system.  People are simply exposed to more radio than they can recall.  And if you put the many practical objections that broadcasters have to PPM aside - price, shifts in daypart listening, more stations in the mix, panels that stay in the sample base for long periods of time - and focus instead on the essence of what we're up against, it's hard not to conclude that passive measurement has to be a key to our industry's future.

The big news this week is HD Radio.  It's exciting to be on the precipice of a technology that can exponentially grow the number of stations that are available to consumers.  But if we're going to accurately track the new digital universe we're about to create, it's absolutely time to abandon this horse-and-buggy ratings system we've been tolerating our entire careers.  I honestly wasn't planning on coming to this conclusion before we conducted these Arbitron groups, but after six sessions among 18-34 year-old consumers, the solution has become obvious.