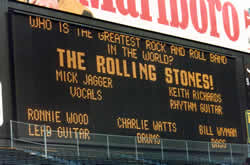 To add to the pile of evidence that there's money in aging Boomers, consider the 2005 official list of highest grossing concerts.  Pollstar reports that the Top 10 includes the Stones (at #1), U2, Paul McCartney, the Eagles, Elton John, and Jimmy Buffett.  This is obviously a great year for Classic Rock concerts, and it shows there's a lot of spending power for Classic Rock, and a glaring lack of new rock in the mix.  Only Green Day (#12) is in the hunt, but only with about 1/5 the revenue the Stones generate.

And that's where the economics come into play.  The Stones grossed $168 million with 42 North American shows, while Green Day played 68 dates, but only took in less than $35 million.  Pollstar explain that it's about ticket prices.  A seat to see the Stones averaged $134 while the price to see Green Day was roughly $38.  Figure that many of the Stones concerts were arena gigs, and you can clearly see a huge difference.

The next time a buyer or agency type lectures you about how aging Classic Rockers don't spend any money, show them the Pollstar list while you hum "Satisfaction."