« My Space & Social Networking Opportunities | Main | Gently Down The Stream » 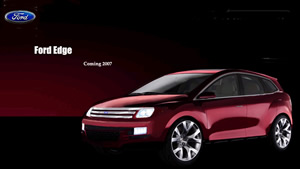 Since we trademarked The Edge in the late '80s, it's been fascinating to watch how many like-named products that have surfaced.  (Yes, it true - the shaving cream preceded our Alternative stations.)

Now, it's the Ford Edge, a new hybrid vehicle that the troubled automaker hopes will be the beginning of a recovery.  The car will debut here in Detroit at the North American International Auto Show (formerly known as the Detroit Auto Show) this month, and will be in showrooms in late 2006.  We wish them well, and maybe they'll even want to work with some of those well-named Alternative stations that carry the same brand name.