TV Is The New Radio 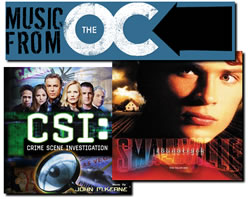 Of not listening to my kids.  They keep hearing new bands on TV shows, causing them to find them and buy them on iTunes.  It took a New York Times article to detail the pervasiveness of this trend, as a "Cold Case" episode is using/licensing nine Springsteen songs (from the '80s) as the soundtrack.  This is an interesting concept, but not a whole lot different than "CSI" using Who songs.

But it's not really the same, because licensing music for TV shows has become a key avenue for exposing new music and new bands - part of a new strategy of getting music played in attractive venues where radio once dwelled.

My teenagers have discovered bands like Louis XIV, Rooney, and Death Cab for Cutie on "The O.C."  And there's "Save Me," the Remy Zero song that's the theme from "Smallville."  The list goes on and on, but the theme is the same - independent labels have turned to television, and even established bands are making use of this exposure, once the province of commercial radio and MTV.

The quote that stopped me cold is from Wende Crowley, "Cold Case's" music supervisor:  "There was the stigmas attached to television, but now it's livening up.  Whenever, I approach a band for licensing, I tell them:  TV is the new radio."