It was a good call. It was a weird call.

Arbitron conducted its call this afternoon to present the results from its Summer '05 study that compares those with Cell Phones Only (CPOs) to those who have Landlines (LL).

Here are the highlights:

When Arbitron blended their CPOs with the "normal" Landline study, the format numbers barely budged. Of course, these numbers are weighted estimates. Arbitron really doesn't know how this will shake out in local markets. 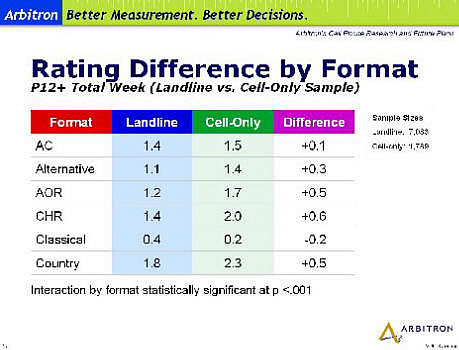 So on the one hand, Arbitron says that CPOs won't change the ratings very much, but on the other, they're taking action to include these people in the mix.

They obviously have internal issues (systems, more interviewers, new calculations, etc.), so including CPOs won't start until 2008 - and the roll-out will proceed. (They reminded everyone that CPOs are already being included in the PPM sample in Houston, and will be a part of PPM moving forward).

So, congratulations to Jacobs Media clients who participated in our first Technology Web Poll last spring. The results of that study were the catalyst to get this issue on Arbitron's agenda, and while their math produces some questions about CPO's ultimate impact, it was obviously an important enough concern to motivate them to change their entire operation.

It will take some time, and costs are unknown, but we are on the right path.