OK, I made up the Clinton and the Pope parts.  But it seems like there's not a week that goes by where XM or Sirius isn't signing a big name or kicking off a big branded channel.

A friend recently toured one of the satellite companies, and was awed by the facilities and the internal attitude.  The place was buzzing with excitement, as programmers were running around, jazzed by the content they were creating.

Meanwhile, in commercial radio land, it's been anything but enthusiastic.  While there are new shows, new stations, and occasional innovations, most radio programmers (be honest now) aren't exactly feeling like they're in the midst of a creative renaissance.  The resources aren't there, budget cuts are omnipresent, and there simply isn't a corporate mandate demanding new, different, or big.

Of course - as I reminded my friend - the satellite radio companies are hemorrhaging money.  And that's the point.  Wall Street permits new media the slack to invest (translation:  generate red ink) as it invents and innovates.  Terrestrial radio?  No way.  The only way to please the investment community is to keep finding ways to do more with less.

So while commercial radio cuts back, satellite radio continues to climb the hill, plowing huge amounts of money into sports, personality, talk, and music programming.  Yes, it's counter-intuitive.

And on another front, HD Radio marches on.  Now there's nothing wrong with this investment in radio's future, and it is indeed remarkable that radio's chieftains have come together to make this initiative possible.  But in the best case scenario, HD Radio is years away from being viable, much less present in enough homes and cars to truly make a difference.

Where will satellite radio be by the time that happens?  And what will commercial radio be doing to sound great during these HD Radio growth years?  HD Radio is a nice down-the-road idea (like hydrogen powered cars), but what about right now - today?

We keep hearing that content is the big issue, but is commercial radio truly investing in its programming?  Are we addressing the youth exodus that will never end unless we take immediate action to start developing programming that is actually geared toward them?  Are we dealing head-on with our growing advertiser issues that increasingly challenge operators to prove that radio is still a fabulous deal?   Are we creating content and distribution options that excite listeners and advertisers?  Yes, we're in 95% or more of homes and vehicles, but this is more than being about penetration.  We have to provide programming that's compelling to both listeners and advertisers. 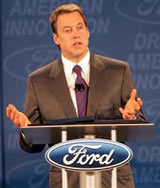 Radio doesn't want to be in the position that Bill Ford now finds himself in.  Having to come clean, announce painful initiatives, and admitting miscalculations are all formulas designed to evade bankruptcy - all uncomfortably announced in front of the whole world.

Between where we are now and where Ford is now, there has to be an industry leader who can do more than simply step up and announce that we're playing fewer commercials.  Only bold initiatives and great innovation will be enough for radio to avoid an even bigger mess than we're facing today.

Where's the alliance that takes on that challenge?

A couple of thoughts come to mind after reading the post: how many years did it take satellite radio to get to its current state; wasn't there a time when satellite radio was just one service (XM) with no big names to offer? Not a whole lot of receiver options either.

We're in the midst of HD Radio's start-up phase...and its going to take longer than launching one or two satellite services, given that we're talking many stations/many markets/many owners nationwide. Affordable radios aren't here - yet.

That said - HD needs to deal with the auto manufacturers as satellite has done.

I've seen no activity before the FCC requiring radios to be "HD compatible", much like the AM/FM compatibility requirements many years ago or the VHF/UHF tuning requirements of television manufacturers a long long time ago.

Should present-day HD radio be promoted as "commercial free"? The current business model of radio broadcasting doesn't make this a long-term "deal" with the listener.

And with content. Are additional channels of HD all going to be little more than a hard-drive resting inside a PC in the rack room? Will this be national content or locally originated?

And - will radio's share of advertising budgets increase to support additional channels in the future or are we simply spreading existing budgets over thousands upon thousands of new channels.

Could someone pass the crystal ball?

Despite the unknown, its an exciting time to be in the industry and remain optimistic about the future. I am.

Would it be fair to compare satellite radio to the dot com boom less than 10 years ago. Talk about hemorraging money!

By now, all the dot coms have seemed to level out. No longer is a website name and idea alone worth millions of dollars.

Let's look at cable. Yes, it took forever for a "community antenna" service to become a household utility on par with telephone or electricity service.
But I don't ever remember the CATV's bleeding.

I hope the HD listeners are the winners in all this. Not just a bunch of copycat hard drive propelled formats similar to what we experienced when FM discovered automation.

HD is terrestial radio's challenge. Satellite certainly has a head start, but we can use that to our advantage...find out what worked for XM and/or Sirius and what didn't and apply or improve on those qualities.