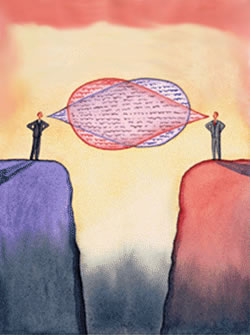 How great is the chasm that separates how satellite and terrestrial radio do business and are measured by Wall Street?  Consider the following facts from a recent Mediaweek article:

Fact:  XM signs Oprah Winfrey for $55 million to program a channel, and other services.

Fact:  Sirius will spend $240 million this year on program content.

Meanwhile, terrestrial stations are cutting budgets, paring back marketing, seeking staff cuts and consolidation, or not having enough resources to stream their audio on the Internet.

Somewhere in the conference rooms of the financial firms, there has to be a middle ground.

That's because the two satellite companies (and just
watch...within a few years they will merge into one...
bet you a thousand bucks) are concerned not with their
share price for this quarter or next quarter or even
the one after that. They are looking w-a-y down the
road to the ultimate payoff...delivering a knockout
punch to terrestrial radio. Like Al Queda, they take
their time and lay their groundwork/framework very
carefully so as to win the war, not necessarily the
immediate battle (keeping company stock price up so
the top brass can take home their performance bonuses
each January...based upon the preceding year's 52-week
price average and/or the individual market-group or
company's aggregate profit margin). If a broadcast
company president or board of directors told you,
"Fred...deliver us a net profit of one million bucks
and you'll get a bonus check for ten percent of that
after we crunch the numbers at the end of December...
so you're looking at one hundred grand in your pocket,
in your young kids' college tuition accounts, etc."
you, too, probably would fall over frontwards for that
dangling carrot on a stick in front of you. Each
market manager thinks its rank-and-file doesn't know
about this syndrome, as if their stations just HAPPEN
to experience a "revenue shortfall" in the fourth
quarter of every single year (gee, how coincidental!)
so they "can't afford" any more bumper stickers or
billboards or focus groups until the first quarter of
the NEXT fiscal year. Even the sales people scratch
their heads and exchange faux looks of surprise and
disdain, as if to say non-verbally, "Well that's
funny...I could have sworn we were having a banner
sales year!". There's a word for this short-term
thinking...a sort of corporate myopia across most
(admittedly, not all) of terrestrial broadcasting---
GREED.

It's do or die for the satellite companies. If they want people to survive they have to offer subscribers and potential subscribers more of a reason than just "no commercials." That reason alone won't get many to shell out the $12 bucks a month plus hardware.

It was just a half-dozen years ago the dot-com industrys were spending money like water to market and develop their websites. How many actually survived after bleeding all this cash? Many merged, were bought up or simply vanished.

Which do you think will happen with XM and Sirius?

Hey, I've thought about your question a LOT.
Debated with myself and with others back-and-forth.
Don't think I'm just being overly negative or
fatalistic, O.K.? It's not as if I WANT this to
be how the movie ends! But I definitely believe
that XM and Sirius will merge. (Probably Sirius
will buy out XM, given the historically pyranna-like
nature of Karmazin.) And, sadly, I see terrestrial
radio just muddling through...taking the lazy and
immediately-profitable route as in the case of how
it likely will utilize its HD sidebands...just
throwing some no-brainer format or service on there
instead of really thinking-through this rare long term
strategic/competitive/innovative opportunity to help
stop audience erosion and create compelling new radio.
Our business almost always takes the "bird in hand"
rather than looking at the "two in the bush". But
our great PRIVATE broadcasting companies tend to be
much more open-minded and inventive than the ones
obligated to Wall Street. Why do you think my old
PD Bill Weston is practically giddy he's so happy
at privately-owned and fantastically-run Greater
Media? That company GETS IT! But they would never
hire me because I have a slight reputation for holding
(and sometimes posting) strong and polarizing opinions
such as this. The truth makes managers very nervous
because it can cause big-time embarrassment and even
some individual/group soul-searching when they look
at themselves in the mirror. Radio managers want good
foot-soldier DJ's who take their marching orders,
execute flawlessly every day and never question the
overall strategy. Kinda like the ones the Pentagon
cherry-picks and parades in front of the press pool
over in Iraq..."The war is going great and Secretary
Rumsfeld and our president are doing a superb job!!"

Anyone who has spent time with their satellite radio can notice a few things right away, its not the lack of commmercials that important, it what the content is thats replacing it. Be it XM or Sirius, there is more content and far less annoying bullshit. Not every regular radio station in america is a major market highly talented well produced product. Most regular radio is the equivalent of listening to oatmeal cool off. Its usually amature,low-intellect, and boring.

So, if you happen to live in one of those areas, large market or small, you now have the same phenomenon taking place as when morning show syndication began, except it now comes with 120+ channels. You now have what most radio doesnt want you to have and that is choice. You can now hear something much better. If you are a music head, then you have the radio equivalent of nirvana with all the music channels, if you are a Howard fan, or a Bubba TLS fan, or an O&A fan, then alright, you have them and more for the equivalent of 2 packs of Bud a month. Thats pretty worth it.

Everyone said cable TV was a pipe dream, people said FM talk was a pipe dream. Guess what, this aint no pipe dream and regular radio has some major adjusting to do. Noone believes that regular radio is dying tomorrow, but in its present form, its looking terminal. And if regular radio and TV doesnt start standing up to the FCC, then the creativity will be squeezed right out of this medium and everyone will spending their time trying not to get fined, vs. creating compelling radio.

Now, not every channel on Sirius or XM is golden egg. But it is much more likely that you will find a golden egg if you have 120+ channels to choose from.

If XM and Sirius made it a point to go and hire the most listened to 30 DJ's in America, what do you think would happen?

Given the choice of this model vs. the traditional model, I've subscribed to both XM and Sirius, and it is worth it from the laughs alone and the unburned music that can be found. I can hear a cut deep in a record that has not been hammered to death on regular radio, regardless of the genre, rock, blues, country, soul R&B, alternative, etc. I can listen to any of the talk programming without the FCC squelching the conversation or vocabulary of the host or guest.

To comment on Dick H. posting above, it really doesnt matter if they (XM and Sirius)merge, it wont dilute the product. Why?, because they are not likely to do anything to scare aware paying subscriptions. They can consolidate back office and marketing and come out ahead, much like the radio bigs did in the 1990's. This isnt anything like the dot com era start-ups, because people are coming to the table with cash in hand, to buy what everyone will agree is the most intimate and personal of the entertainment mediums. Thats a damn good combo.

I think its likely that XM and Sirius will merge, and that Mel will lead the show. Wall Street likes him and they know he knows how to cut / manage costs. But he's also a smart guy and he knows that content is king.

I think that there will also be other providers that come along that will be smaller and more boutique in nature over time.

Ladies and Gentlemen, Elvis and this train have left the station.......