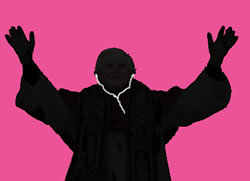 The Vatican announced recently that Pope Benedict XVI was given an iPod by a group of Vatican Radio employees.  (Of course, you're wondering - it was a nano).

They preloaded it with a potpourri of classical music programming, along with various features that are specific to the Pope's work.  Apparently, no AC/DC or Sabbath.

But as the results of our new Tech Poll are rolling in, we can tell you that this story is consistent with what's happening globally.  Of all the new media we tested, iPod ownership shows the single largest gain from year to year.

And of course, that begs the question:  If the Pope now has an iPod, why don't you?