« Hold The Phone II | Main | Does Your Organization Have DC? »

Yes, Virginia - There IS a Farm Team

It's not a very bold prediction on my part, but in this first post-Stern trend that we're all keeping a watchful eye on, we declare a winner!  With only half of the precincts reporting, KISW is the big story of this first trend.

Now I know what you're thinking - it's just a trend - in fact, it's just an extrapolated month - and we know how up and down they can be.  But we've also seen some incredible losses in many Howard Stern situations, enough to realize that even the Arbitron diary system has been able to get a pretty quick fix on audience losses. 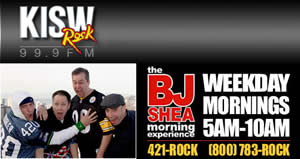 How did they pull this off in a national environment that is running totally contrary to this trend?  Programmer Dave Richards had a plan in place all along, as morning guy Shea was across the street on The (late) Buzz in middays.  Dave and the Entercom Seattle team have been working on the succession plan for months.

In much the same way that Brian Williams seamlessly replaced Tom Brokaw, Richards actually developed a farm team system that is already showing strong signs that it will keep KISW strong and viable.

Of course, there are many 'Trends and 'Trons to go in Seattle, but this is one remarkable story in what promises to be a memorable Winter rating book.