One of the realities of this most recent March Madness season was the huge number of office workers spending time on office hi-speed Internet connections - doing just about anything online other than actually being productive.  Our Tech Poll II shows that 90% have access to hi-speed somewhere, so listening to streaming audio and video becomes easier and more commonplace.

Internet advertisers get it, too.  Many are circling their wagons around the midday hours - the time when most office workers are surfing, getting information, entertainment, or just killing some time.  This is increasingly where coupons and other Internet offers are popping up. 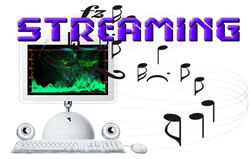 It also ought to be the place where radio station streams are heavily promoted. Yes, it's great that more and more stations are streaming.  Our Tech Poll II indicates that they are growing in prominence and listening.  But too often, we find that radio stations don't do an effective job letting listeners know they're streaming AND how to use the stream.  ("Making it easier to listen at work," "While you're working on those spreadsheets or putting together those PowerPoints, listen to Z93 online.")

We have long maintained that the best brands on the Internet are well-known, highly cumed radio stations.  As broadband becomes more and more common, local radio is in a great position to cash in on new media in both additional listening and new revenue.  Go for it.

Couldn't agree more that at-work listening should be the focus of how radio promotes streaming.

Also, adding to the case for streaming, two young men in a recent focus group told me that they not only don't have radios at work -- but don't have radios in their homes either. The only way for FM to reach them there is online. That's a trend that's likely to grow as Gen-Y moves out on their own.