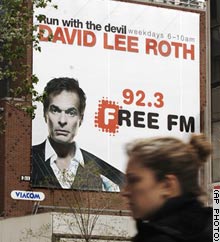 Or "They come and they go."  I worked for a guy who had that acronym on his desk as a reminder that success is fleeting, and the "next big thing" often fails to live up to the hype.  So, like the ill-fated TV shows hosted by Chevy Chase and Magic Johnson, a quick goodbye to David Lee Roth, on the radio for about 75 shows - game, set, match.

As Howard Stern pointed out not long after Roth got the impossible gig, morning radio is harder than it looks.  He's right, of course, and in an act of true irony, Opie & Anthony are going to be sitting in his big chair - promoting "the other satellite company."  Go figure.

It was predictable that '06 was going to be a weird year for radio, and that's coming true in spades.  Between Roth, payola, and HD Radio, there's never a dull day.