JacoBlog - Jacobs Media's Blog: "You Gotta Serve The People In Your Community"

"You Gotta Serve The People In Your Community" 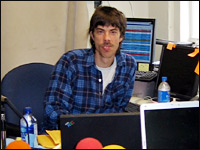 That's what Brice Phillips says.  Somehow, this small town broadcaster clearly understands what many of us are struggling to get our arms around.  During a trying time when terrestrial radio is being bombarded by competition from so-called "new media," like iPods, the Internet, and satellite radio, Phillips intuitively knows that serving the folks in your hometown is indeed radio's "secret sauce."

The linked audio story about Brice Phillips' WQRZ-LP (Hancock County, Mississippi) is as instructive as it is inspirational.  During last fall's hurricane disaster, Brice kept his station on the air, providing the only viable communication with his area.  There are always lots of heroes during tragedies - whether it's 9/11 or Katrina.  Several New Orleans broadcasters, like WWL, stepped it up, and kept their communities informed.

It all goes back to the power of radio.  It is local service, the hometown connection, and serving our neighborhoods and towns that brought us to the dance.  This is why at Jacobs Media, we have been so adamant about NeoRadio, and its outreach to listeners.  It's not just about ratings - it's about building that bridge to listeners, and providing services and value that they just cannot get anywhere else.

Mississippians don't listen to WQRZ because they play fewer commercials now or because they give away cash.  They listen because the radio station is meaningful and speaks to them in a uniquely personal way.  Brice Phillips truly "gets it."