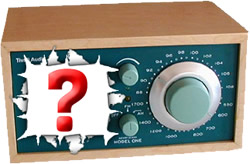 While flipping through a recent Billboard Radio Monitor devoted to alternative delivery for radio, I happened across a column called "Programming For Kids:  Still Off Radio's Radar" (subscription required).  Edison's Larry Rosin had a telling quote about why commercial radio has virtually no appeal to younger listeners, "You reap what you sow.  Target them and get them."

What an incredible disconnect we have when it comes to youth radio.  Several years ago, Steve Goldstein hijacked me into participating on the NAB's programming committee.  The task?  Create compelling panels for programmers and managers.  As most of you know, that's tantamount to making baseball games move faster.  Not easy.

But we put together some good stuff, and I created a panel called "My 14 Year-Old Thinks Radio Sucks."  The title said it all, and we had a solid group of participants.  The idea, of course, was to stimulate radio's managers and owners to think about how the industry is missing the boat - and lots of revenue - because of our 25-54 myopia.  That was in 2001.  Five years later, it's the same old-same old.

And the craziness is that when you speak to radio managers, corporate executives, and CEOs about this dilemma, they are always in agreement.  Intellectually, it's obvious that if radio doesn't start creating programming aimed at teens (or even pre-teens), our future is bleak.  We have already lost the current generation of teenagers to the Internet and iPods.

Yet, financially, no one is willing to pull the trigger on creating youth radio.  In spite of large clusters of stations in many markets - which always include at least one out-and-out "loser" - radio is just not making this a priority.

And that's where HD Radio ought to come in.  Here we are, creating stations and formats that don't have to worry about ratings anytime soon.  Yet, companies aren't proposing youth-driven formats.  I perused the HD2 formats from 28 markets on the HDRadio web site, and I can't find a single teen or pre-teen driven radio station.  I checked out the 75 formats being developed by Clear Channel's ambitious "Format Lab."  While there's the "Blue Monkey Saloon," "SRO" (show tunes), "Trancid," and "Hits On High" (religious), there's no sign that there are formats called "Dude," "Rad," or anything else teen or pre-teen driven in the works.

Hey, Peter Ferrara, Tom Owens, Bob Struble - isn't HD Radio about programming radio formats different enough to stimulate the purchase of expensive radios?  Shouldn't radio be targeting listeners who have been disenfranchised by AM/FM sameness?  This is radio's opportunity to step up, fill the gap, and cement its future.

I have been thinking EXACTLY what you wrote on your blog...the 25-54-itis is so complete that it took over HD radio too. It is as if we litterally have FORGOTTEN how to program to young people, even though almost every one of the alte-cockers in this business got into it because they listened to youth-targeted radio once upon a time.

I personally think yet another option for HD would be to have the ENTIRE tier be reserved for youth radio. No programmers over 25 allowed...and make it entirely experimental and crazy...kinda like a little thing called FM radio in 1969.