"Thou Dost Protest Not Enough"

With all apologies to William Shakespeare...

Rock journalist Gary Graff recently asked me about the place of protest music on the radio.  Back in the day, of course, "For What It's Worth" and "Ohio" were synonymous with that spirit of activism that permeated Rock Radio in the late '60s and early '70s.  Of course, there was an unpopular war going on, an unpopular President in the White House, and lots of division in the country.

Sound familiar?  So, is there a connection to today, and if so, where's Rock Radio as a voice of protest?  My, how things have changed.  Just ask the Dixie Chicks who paid the ultimate price for being honest a few years ago.  Or Bruce Springsteen, whose leadership at the Vote For Change concerts have cost him at the box office, at the checkout counters, and on the airwaves of Rock and Classic Rock radio.

Today's Classic Rock stations don't represent listeners from any particular side of the political aisle.  You can enjoy great classics from CSNY or the Stones that had a distinct message, but not sympathize with (or even remember) their original appeal and causes.  In a web poll among Classic Rock stations a few years ago, we asked respondents about their political leanings, and the results were telling.  In "blue state" cities, these listeners were distinctly liberal, but of course, in other parts of the U.S., the audience was clearly on the right side of the ledger. 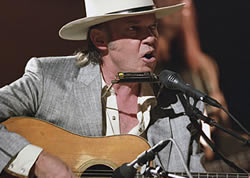 So, in this environment, what does radio - or Classic Rock radio - do with the new Neil Young album, Living With War?  (It is available at www.neilyoung.com)  It is most definitely a theme album, punctuated by the much-publicized "Let's Impeach The President."  No words minced by Neil Young - ever - so his "take" on the current situation is anything but ambiguous.  Let's also remember that Neil supported the earlier war efforts, and rushed-produced/released the chilling "Let's Roll," his story song about the ill-fated Flight 93.

And don't forget that there's been a sea of change of opinion since the Dixie Chicks incident.  Faith Hill and Tim McGraw openly lit into the Bush Administration after visiting hurricane damaged towns just a month or so ago.  And the poll numbers don't lie.

I'm open to suggestions, but this album is historic, interesting, and clearly newsworthy.  Our morning shows talk about every other pop culture phenomenon from "American Idol" to Brad/Jennifer/Angelina to rising gas prices.  Neil Young is on a lot of listeners' Classic Rock "Mt. Rushmores."  Why not give this new effort exposure, open up the phones, and let the fur fly?  Before NPR does.

Neil Young and Bruce Springsteen are getting much of the press lately but there's lots of great protest music out there. Pearl Jam's "World Wide Suicide" is on top of the charts now and just last year Green Day's "American Idiot" was a million seller.

There are great lesser known acts out there as well. Take Josh Ritter, for instance. His track "Girl in the War" is more traditional protest song in execution but its building quite an audience of its own. Check it out:
http://www.joshritter.com/album_animal.shtml