JacoBlog - Jacobs Media's Blog: You Heard It WHERE?

You Heard It WHERE?

In one of those less-publicized findings from our Technology Poll, we learned more about the power of radio to expose new music to its audiences.  Overall, more than half say they hear about new music first on FM radio stations.  While that's #1 with a bullet, as we used to say, we don't know whether that percentage might have been considerably higher a decade or more ago. 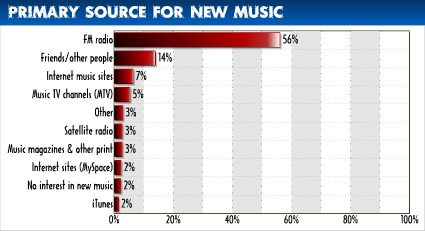 What about those who find out about music from other sources?  As the table shows, word-of-mouth has always been important, but Internet sources, music television channels, and other exposure vehicles are becoming factors.  Alarmingly, among Alternative fans, only 46% point to FM radio as their primary source, showing strong indicators that younger consumers are going elsewhere to find out about new releases and upcoming bands. 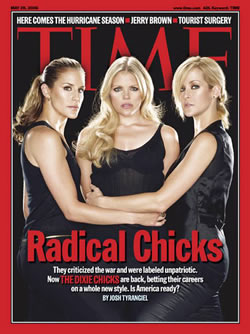 Segue to a phenomenal event that occurred in the music business this week.  A superstar group that has gone out of its way to offend its fans and its core radio stations has released a controversial new CD.  Radio has responded by ignoring this release in deference to the outcry from its listeners.

The result?  The new Dixie Chicks CD, "Taking The Long Way," debuted number one in sales in this week's Billboard charts, selling 526,000 units.

The Chicks have thumbed their noses at radio, as programmers are fixated on riling up their audiences by staging protests and burning CDs.  Real smart.  Turn on your TV and you'll see Natalie Manes and crew on "Larry King Live" and other major shows.  Walk by a magazine rack and they're on the cover of Time.  The Chicks understand the power of celebrity and controversy, and have transcended their talent to become major league celebrities by sticking to their beliefs and carving out their own path.  It is reminiscent of the way that Top 40 Radio boycotted the Beatles after John Lennon (sort of) said that the Fab Four were bigger than Jesus Christ.  That sure hurt the Beatles popularity, didn't it?

We don't profess to know anything about Country music or its fans, but it seems like Natalie Manes, who Time describes as "being born with her middle finger in the air," is the Howard Stern of the music business.  Dangerous?  Perhaps.  But also enormously popular.  People love rebels, especially those who are snubbed by the establishment.  Remember one of the "Cult Branding" tenets - you need an enemy in order to truly reach that lofty status.  By ignoring the Chicks, radio is playing right into their hands - and losing the war in the process.