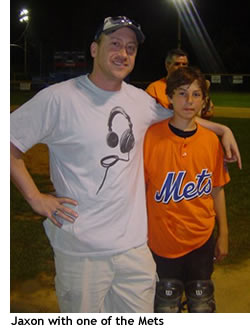 What does a major market Rock station like WMMR do for the summer?  Pull off a mega concert series?  Give away Harleys?  Run a contest around a beach house?  Or how about sponsoring an entire Little League?  In this case, the Drexel Hill Little League.

For a station that does everything in a big way, it's interesting to note how sponsoring a simple family event can provide a real exciting, community-based moment.  For the record the Jaxon Mets whipped the Randy Kotz Nationals 10-4.  Don't look for XM or AOL Radio to be doing this anytime soon.

Only "Biker Bill Weston", my favorite PD of 37 years
in this business...and my other PD's include Jeff
Pollack at WMMR before he started his consultancy;
Bill Pugh (Dan "Pugh" Patrick's brother); Tom Taylor
(who wrote the NICEST note of recommendation
one-and-a-half years ago for me to obtain my
Master of Divinity degree from Bethel Seminary...
which I begin in early September, finally); Bob
Neumann of that lendendary XL-102 Richmond decade;
Tom "Evans" Flamia from the same '82-'92 period;
Tom Bigby / Liz Kiley of WIFI in Philly '81, the
very under-rated Paul Johnson (now a "big fish in
the proverbial little pond" of Fredericksburg, VA.
but formerly a major player in Colorado Springs and
briefly at WKLR 96.5 "The Planet" in Richmond, VA.;
and J.T. Stevens, also of the Planet, who took the
bullet for my then-reckless butt when I got a DUI
in 1998 (not an experience I would recommend if you
want to stay on the air...I was blessed to have a
loyal PD at that moment).....but BILL WESTON, who
now sits in the exact same office I once did at One
Bala Plaza on City Line Avenue in Philly...leave it
to HIM to come up with a seemingly-easy-and-obvious
terrific idea (if it's so obvious, then why have we
not seen it done before ???) shoots and scores again!
To Pierre Robert (whom I've never met...he took my
place on MMR's midday show when I exited to do the
W-4 Detroit midday/PD thing and bring in Stern), to
Randy Kotz (still there...heck, he worked for me back
in 1981), to Buzz Knight (Bob Kozak...ooooh!, I'm
gonna catch mucho bad kharma here for revealing
Superman's original, real identity...Buzz is pure class)
and all the rest of the Greater Media Philadelphia
pros responsible with WMMR's third or fourth
successful re-invention of itself.....way to go!!
What a fantastic, "right under our noses, yet nobody
thought of it" summer promotion that reaches whole
families of diary-keepers. I take my hat off to you
again (to you, also, Mr. Jacobs). Folks...(not that
too many of you sit around waiting and wondering what's
up with that Hungate character...but anyway)...I will
be off your "industry radar screen" for at least years and
and perhaps even forever. The almost-too-good-to-be-
true city of San Diego awaits!! I'm in, enrolled, have
the apartment and am ready to tackle a cranium-busting
subject called GREEK (I must be wacko, huh?) Greek is
to a divinity student what organic chemistry is to a
wannabe doctor or R.N. That is to say, it separates
the PREtenders from the CONtenders! But having been
there-done that in secular radio since age 15...and
having gotten the spiritual "call" (which is a soul-
level thing VERY difficult to explain/convey to someone
else)...it is Christian ministry for me from here on.
Thanks to everybody who taught me, mentored me, put up
with my sometimes-seeming arrogance or ego (I only
came off that way...folks close to me know better) and
were great radio buddies along the way. It was, in
general, a fantastic ride...and, in specific, punctuated
with perilous months when I wondered just how many cans
of 69-cent Bumble Bee tuna with saltines I could keep
eating while waiting for that next gig to pop up.
Best of luck to you all! Keep your eyes on the Middle
East, and if you haven't taken a spiritual inventory
in a long while, why not do it now? Remember that
even the supposedly biggest radio luminaries such as
Mel, Howard and Trump will not take ONE SINGLE PENNY
with them. Wow...what a concept that we tend to forget!
Where is the great Johnny Cochran, that brilliant trial
showman/shaman who saved O.J.'s bacon...where is he
today? Answer---"6 feet under",(and I don't mean the
cable TV series). Not one red penny, which most folks
today are too lazy to pick up off the nasty floor, went
with him to the next life. A sobering, yet very real
notion to chew on...