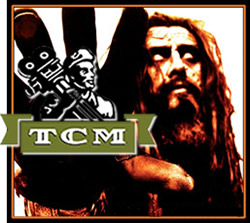 You have to admire those execs at Turner Classic Movies.  They realize that Cary Grant and Fred Astaire aren't going to deliver advertiser-friendly demos.  And if they don't do something to broaden their reach, they'll end up like...WCBS-FM.

So, give them some credit for trying something different.  They're using late night hours to bring in that desirable young Rock audience.  (Hey, it's television - the medium where young guys are actually in demand.)  Rob Zombie will host a cult movie series, designed to bring in the same dudes who spend their late nights slamming Bud Lites and watching "Adult Swim."

The other innovation is using contemporary actors to recreate classic move scenes.  The pilot features Wilmer Valderrama ("That '70s Show") - the guy who plays Fez - doing scenes from "The Lost Weekend."

Crazy?  Dangerous?  Or smart?  Why not use those late night hours to experiment, try new talent, bring in younger viewers, and build for the future?  Just like radio used to do.