Pulling Back The Curtain

Today we have a guest blog from Jacobs Media's Tim Davis:

We've talked many times about the various ways stations can engage their audiences, and bring them more in to the fold - listener created ads, web surveys, L.A.B.s, etc.  You may also recall our recent NeoRadio memo which deals touches on this as well (also see our "Listener Created Ads" piece).  This piece dovetails nicely with that Neo memo.

With the competition for eyes and ears - and especially given what we saw in the latest Jacobs Media Tech Survey in terms of competition on this front - there's never been a more critical time to create a high-touch connection with your listeners and customers.  And TV is getting it right at a much more rapid rate.

An article in USA Today from a while back underscores the lengths that certain TV shows have gone to create a rapport with their audiences, and therefore bridging the gap between the "box" and the experience of being a fan.

While the article deals with blogs (which stations, PDs, and jocks should be doing anyway), the key is that there's never been more opportunities to create connections and reveal something about "how the sausage is made."  Some examples:

The hottest show on TV right now, "Lost," has no less than 35 blogs created by fans, along with nearly 10 big message board sites, and at least a dozen podcasts.  The producers of the show wisely launched their own "show-approved" message board during the middle of the first season.  This "approved" site quickly scaled the deluge to become the number one destination for show fans.  Why?  Because the producers actually made appearances and posts - as did the cast and crew (writers are actually a staple on this site).  It's "official" but they've made it fun and included inside scoop and stories that "fans" could never find out about on their own.  The producers control the spin. 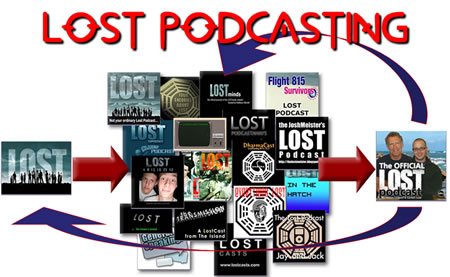 Late last year Damon Lindeloff and Carlton Cuse - the producers/writers of the show - launched a weekly podcast.  It's goofy, and loaded with sarcastic, inside-baseball stuff, and it's one of the most popular podcasts available.   Again, despite the dozen or more (and some are well done...) fan-based podcasts, the key to the success here is access, inside information, and pure entertainment.  It takes the normal levels of enjoying a show, turbo charges it, and turns fans into fanatics.  But best off all - it was additive, not subtractive - to the overall "fan community."  They worked hard in positioning both their message boards and their podcast as adjuncts to the fan created material - and often referenced the other sources in their own creations, helping to further the cycle of engaging the fan-base AND driving traffic back to their own show.

Another outstanding example is NBC's "The Office."  This show has taken advantage of the everyday office setting to actually provide live Internet connections to the cast as they sit on the set (the nature of the show requires most of the cast to be on the set extensively, even if they aren't actually doing any lines or speaking).  So half the cast have blogs or Myspace sites which they update regularly during the TV season.  Jenna Fischer (Pam) not only maintains her MySpace site (www.myspace.com/pambeesley) in character, but she also posts about on-set happenings for TV Guide. Rainn Wilson (Dwight) has taken it further - he's got a blog, and MySpace presence, but also creates "lists" for his character's favorite things (check out Dwight's "Office Mix" on iTunes).

The number of shows using blogs to supplement, enhance, or even bring plot points into the show (see "Crossing Jordan's" Nigel Blog) has probably quadrupled in the last six months.  Many of them are pulling back the curtain from a production/writing standpoint ("Lost," "Grey's Anatomy," "CSI: Miami," CBS's new hit "The Unit") while most add to the storylines and plots ("The OC," "Medium," "Crossing Jordan," "NCIS," "How I Met Your Mother," - really funny! - and even NBC's new "Deal or No Deal" features postings from the "mystery banker").  The USA Network has done an excellent job in promoting their shows under the "Characters Welcome" umbrella.  They've created blogs and diaries for many of their programs characters - most notably The 4400 - where key plot points and inside info on the show is posted.

All of these shows are looking for a stronger, more engaged relationship with their audiences.  Sound familiar?

Don't let the high-touch relationship escape your station and jocks - play them off as characters, enhance their images and attributes through a blog, MySpace sites, or even "Be Like Dwight" - post Top 10 lists all over the Internet, put together a list on iTunes, make Amazon "So You Want To..." lists, etc.  There're plenty of opportunities to become entrenched in the audience's life and bring more of the station's/jock's personality out in ways that short breaks several times an hour don't allow.

Even Program Directors can create "tension" and "entertainment" in postings - it doesn't have to be dry, routine facts in your posts.  Engage in discussion, debate finer points of artists' careers and songs, report the squabbles from weekly music meetings, or post the "five runner-up promotions that never made it on the air."

Pull back the curtain, show how much fun the day-to-day comings and goings in a radio station can be, and make the audience part of it.  None of these things requires a degree in literature or even more than a few lines of writing each day.  The audience isn't coming for the meaning of life, the universe and everything (except probably "Lost" fans...).  They want to be entertained and feel like they know more about YOU today than they did yesterday.  Give it to them.