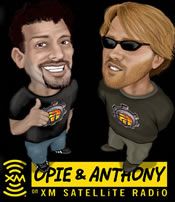 What a strange turn of events we have witnessed in morning radio during the past two years...and past two months.

Go back to the aftermath of the Opie & Anthony St. Patrick's debacle.  They are exiled from terrestrial radio, while Howard Stern maintains his dominance.

Eventually, O&A have no choice but to sign on with XM who bungles the deal by making their show a premium channel, over and above the subscription fee.  That makes them like HBO, except the vast majority of XM subscribers have no idea who they are.  So, with the exception of XM listeners in markets like New York, Boston, and Philly, O&A fall off the radar screen.

In fact, O&A were stiffing on XM.  Check out our Technology Poll from late February of this year.  When we asked XM subscribers what motivated them to shell out the money for this service, they didn't even make the cut.  Overall, only 4% of XM customers cited O&A as the main motivator: 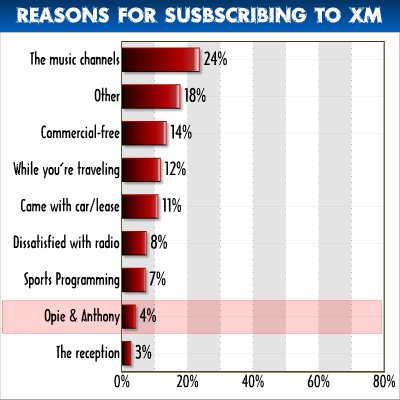 Then Howard defects to Sirius, and we know the rest of that story.  He gets paid a ton of money, and converts 20-odd percent of his former audience to Sirius, leaving the vast majority of his former listeners to find a new terrestrial show in his many markets.

Now, Opie & Anthony are back - commercial radio's new golden boys.  Meanwhile, Howard finds himself talking to fewer listeners - in the millions - on Sirius.  O&A now have their cake - and they're eating it, too.  They get to say whatever they like on XM (while participating in the so-called "new media world"), while they see their radio network growing, now that Howard's out of the picture.

So it comes down to this - where would O&A be without terrestrial radio?  Is there a better avenue for building a profile on the radio than good old AM/FM radio?  Is there any way a personality could pull this off on satellite radio, AOL Radio, or podcasts?

No way.  O&A will get much farther by working their terrestrial audience than they will the handful of XM listeners.  And now that they're free on commercial radio, why will anyone bother to pay for them to say the F-word every quarter hour?   They should send Howard and everyone at CBS nice gift baskets.

Terrestrial radio has lots of juice left.  But not if it isn't aggressively developing content.  Content is not "the most music in a row."  Nor is it about music formats.  It is highly differentiated, unduplicated entertainment.  Cutting budgets, putting PDs on charge of multiple stations, and voicetracking are kryptonite for terrestrial radio.  And allowing personalities to get away to XM and Sirius may not grow their businesses - but it will most certainly hurt ours.

We have the transmitters and the usage.  But if the content's not there...

These are two companies that "get it";

XM understands that they're not just in the DELIVERY buisiness, and puts O&A on terrestrial radio.

1) They sound, on the air (and by all accounts off the air) to be like completely reformed former-prisoners. They know why they have kept getting fired everywhere, and they sound determined not to get fired again.

2) They have taken one interesting theme on the air: Talking a lot about Howard. They give their listeners many, many pretexts to say to themselves: “Gee, I’m a lot smarter listening to this than to shell out money to listen to Howard.” Among the things they do:

a. They have a tape where Howard admitted he couldn’t do a good show without being dirty, and that he just couldn’t work within the strictures of the FCC. Thus, they revel in the fact that they can.

b. They talk a lot about how few people listen to satellite radio compared to am/fm, and thus how few are listening to howard anymore

c. They talk about how Howard is old (they used to do this in the old days too)…’yesterday’s morning show’