Not A Secret Anymore

A few years ago on "ratings day," I spoke with a PD/client who happily informed me that his Classic Rock station finished #3 25-54 Adults in the recently released Arbitron survey.  That performance earned him a nice ratings bonus.

A week or so later we spoke again, and he sadly told me that in fact, he didn't make that bonus.  After the station did their Maximi$er rankers, the Public Radio station in the market actually came in second, nudging his Classic Rocker down to 4th.

Like a lot of commercial radio broadcasters, he never saw it coming.  Public Radio has become a major listening force.  Now a new Ipsos study ranks Public Radio an impressive fourth in weekly audience, ahead of some format stalwarts: 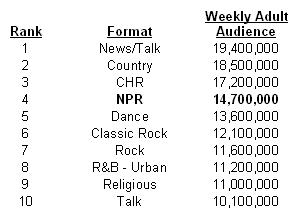 And even Rockers listen to Public Radio.  In both the 2005 and 2006 surveys, our Technology web polls found that about one-third of those who are in Rock station email databases tune in a Public Radio station at least weekly.  Many of you have seen this phenomenon in your own perceptual research.  More often than not, there's a Public Radio station in your hometown that ranks right up there in the highly valued 25-54 sweepstakes. 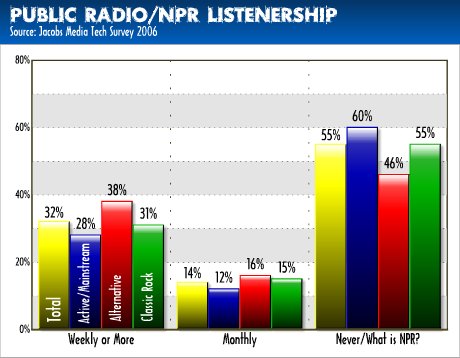 How is Public Radio pulling this off - without marketing, without Harley giveaways, and without two guys in the morning talking about Mel Gibson?  They're about quality programming and a value system that comes through loud and clear day in and day out.  NPR programming, in particular, has become the paragon of credibility in a media world that is filled with hype or "traffic and weather on the 8's."

At some point down the road, Arbitron will very likely include Public Radio ratings in their market reports.  And in a PPM future, we'll also see the quality audience that they've been aggregating all these years.  After all, how many commercial stations could pass that litmus test of having listeners write a check in order to keep them on the air?  That's the roadblock that Public Radio stations face everyday.

Many commercial broadcasters don't listen to Public Radio and don't know much about it.  In an overcrowded media world where quality has given way to quantity, it's worth tuning in your local Public Radio, visiting www.npr.org, and understanding how their listening has grown during the past few years.  It shouldn't be a secret.

Its interesting to note that NPR - with its mix of news, talk - and depending on the station - shows like Prarie Home Companion, Mountain Stage or blocks of classical or AAA-style music - is being referred to in the study as a format all by itself.

I think a lot of these stations would have been considered block programmed not-so-many years ago.

And based on some casual, non-scientific observations of many die-hard NPR listeners, they describe their format of choice simply as NPR. When I've asked why they simply say that it doesn't insult their intelligence.

Add NeoRadio with the NPR factor and it really gives pause for thought on station formatics, attitude and execution.

Paul, you nailed it when you said about public radio, "They're about quality programming and a value system that comes through loud and clear day in and day out." And you're right -- despite those endless and annoying pledge drives, the fact is that people do contribute, voluntarily, to something they get free. Such contributions are public radio's largest source of funding. One thing to be aware of. Public radio is more diverse than just NPR. For example, the well-known and very successful programs Prairie Home Companion and Marketplace both come not from NPR, but from the Minnesota-based American Public Radio. And, there's a third syndicator, Public Radio International, that presents shows like Ira Glass's This American Life and The World. The fact is that in our country, the only one on earth where "public radio" was an afterthought, the medium is booming. A real testimony to the fact that at least part of the audience will seek out and pay for quality.