It's An Online World 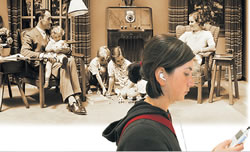 Today's New York Times features yet another article on the sagging radio business. Most of it circles around the same turf you've read again and again, but one quote stood out. In an attempt to explain why radio stocks have fallen out of favor with Wall Street so quickly, the article notes:

"A possible reason is that unlike other media businesses, radio appears to have come late to the game of focusing on viable online business models. Although digital revenues are growing fast, they accounted for only $87 million of the industry’s $20 billion in 2005 revenues, according to Veronis Suhler Stevenson Communications."

This is yet more evidence that changing business models are so important to radio's growth - and survival. And it's why we've geared our Summit 11 agenda, "24 Hours to the Future," to address these issues. It's not too late to catch a plane to Dallas and spend a productive, insightful, and meaningful couple of 24 hours with us.

And the best part of Jacobs Media's Summit 11 is that it's perfect ROI. There's no admission fee. We just need your presence and your participation. Summit 11 will include more of radio's CEOs and corporate execs than in any other year. We strongly believe it's our most important Summit ever. Call us at 248-353-9030 to let us know you're coming, and check out all the details at www.jacobsmedia.com/summit.

This Jacobs summit??? Is this something new? I didn't know this was going on...I wish you guys would have said soemthing about it over the last few weeks! :):):):)

Good luck with all next week!