JacoBlog - Jacobs Media's Blog: It's The Most Wonderful Time of the Year...

It's The Most Wonderful Time of the Year... 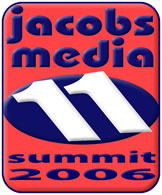 Well, around here, gearing up for another Jacobs Media Summit is always celebratory.  And as you've probably garnered from our self-publicity, as well as ads that you may have seen in R&R, we have a killer line-up for this year's combination R&R/NAB Conventions.  This is the first year the Summit has been scheduled for September, and we're thrilled to be associated with these other big conventions.

Here's what you need to know:

David Rehr - NAB's CEO on "The Future of Radio" -
David has already infused the NAB with a new spirit of energy.  He's a great speaker and a man with a plan.  I had the pleasure of speaking with him at the Michigan Association of Broadcasters annual meeting last month.  In addition, to sharing his vision with us, I will be interviewing him one-on-one, asking him questions specific to radio and our formats.  We are also leaving time for Q&A, so we'll hear from you as well.  You will be impressed with the NAB's new leader.

Gordon Borrell - Borrell Associates, Inc. on "The Future of Generating Revenue Online" -
Everyone who has heard Gordon speak on how radio has an Internet future has given him straight A's for his observations and strategies.  He will walk us through an analysis of how much revenue is now being generated locally on the Internet, and help us draw the map that leads to radio getting its fair share.  Gordon sees the new media picture above and beyond radio, and his perspective about what other media have been up to is essential.  If you've been debating and discussing these topics within your company, you won't want to miss this session.

Jason Calacanis - CEO of Weblogs on "The Future of Media" -
We were fortunate to have Jason keynote Summit 5 where all he did was accurately predict many of the things that have come true for radio and new media.  In business, he has demonstrated that ability to skate to where the puck is going, the trait that made Wayne Gretsky the "Great One."  To that end, he recently sold Weblogs, Inc. to AOL for a reported $53 million.  Jason will paint the picture of how radio can co-exist with, and participate in, the digital landscape.  As we heard in '99, he won't hold anything back.  Take notes.

Ben McConnell - Consultant & Author of "Creating Customer Evangelists" on "The Future of Marketing: CGM" -
Ben is another Summit alum who turned us on to using our databases to find and nurture the evangelists in our midsts.  For Summit 11, Ben will shift his attention to CGM - or Consumer Generated Media/Marketing - a trend that we have been championing during the past year or so.  Ben "gets" radio, and clearly sees how CGM applications perfectly dovetail with the needs and assets of our medium.

We also will feature some real-life radio examples of CGM, including WMMR's Bill Weston who will show how his morning show used the creativity of the audience to design a billboard campaign; KAZR's Ryan Patrick who will reveal how his listeners created the station's spring TV campaign; and WCSX's Jennifer Williams who will show us how her stations harnessed the power of the audience's cars to create a unique media happening - what you would expect from a Motor City station.  You will come away with ideas of how your station can pull these types of campaigns off, while generating lots of buzz at the same time.

Jeff Angus - Author of "Management by Baseball" on "The Future of Management" -
Jeff is an amazing management consultant who has made the connection between baseball's best field generals, and how their techniques translate to the conference room and the corner office.  He has married his love for the National Pastime to his experience with corporate America.  Plus, we figure there will be some hot divisional and wild card races occurring at Summit time, so Jeff's appearance will be timely.

Of course, we know that it's become even more difficult to get to conventions with all the financial pressures at hand.  But we believe we've put together a program that is well worth your investment in time and money.  If you can make it, we'd love to have you in the room, soaking up the knowledge, and making contributions of your own.  That's the philosophy behind this blog, and the way we continue to learn from each other.

If you're a Jacobs Media client, we believe these Summits are a way to realize the investment you make in retaining us.  And if you're not, they are a chance for us to meet new people to show you what we're all about.

Just head to our Summit page for more details and times.

See you in Big D.