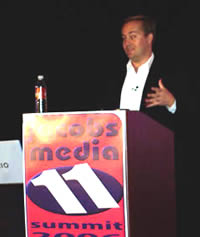 No, not the Cheap Trick song, but Jason Calacanis' advice to Summit 11 attendees as part of our "24 Hours to the Future" program.  Jason took on the difficult challenge of defining "The Future of Media."

Those who saw the speech in real time hopefully left for the day with the right takeaway - that in order to win, radio has to come to grips with the fact that it's competing in an online, on-demand iPod world with infinite variety with no commercials.  The Edison study on 12-24s - and research like it - is proof positive that radio is already having trouble doing battle in that environment.  With young people, we are clearly losing the war.

The method to Jason's shock tactic was to note that while one door may be closing for radio, another is opening.  The purpose of his speech was to get everyone thinking about how our business can effectively and successfully walk through that new door of opportunity.

But when I tell you "you had to be there," I'm not kidding you.  We have great buzz on Jason's speech, but we have also heard several stories of people and press sites take his words out of context.  Now that may be a huge cliché in and of itself, but in fact, you'd be doing just that if all you heard about his speech was "SURRENDER!!!"  (The speech will be streamed soon so you can listen to it in its entirety, and judge for yourself.)

Jason - by virtue of selling Weblogs, Inc. to AOL - is now an executive of that company.  He told the story of how AOL recently walked away from $1 billion dollars in profits!  They did just that when they studied their revenue model, and realized they were a dial-up company in a broadband world.  When AOL announced several weeks ago that it was giving up on its dial-up business in order to re-start as website/content-based company, it was effectively "surrendering" its old model in order to create a new one.

That was, in fact, his advice to radio.  He urged broadcasters to take their powerful assets -huge reach, great salespeople, and skillful production - and meld it all to create new revenue vehicles, podcasts, and yes, great content.

With the Summit, we have always taken the position that our mission is to stimulate, teach, and grow.  That has produced controversy over the years - Lee Abrams' terrestrial radio rave a few years ago, Harry Shearer's indecency tirade two years ago, and yes, Jason this year.  In fact, Jason's history of shaking up the room first occurred back in 2000 when he held up a copy of Radio Ink's "40 Most Powerful" issue and questioned why there was not a single programmer, DJ, or morning show among the elite group.

Part of what's been missing at these conventions are panels and sessions that aren't afraid to ask the difficult questions, expose broadcasters to outside views, and to challenge ourselves to get better.  That's why the Summit has been so successful.  We started the day with the view from the new CEO at the NAB, David Rehr.  And it ended with Jason's vision of a possible radio future.

And when you consider that the NAB's theme this year was "Redefining Radio," doesn't it suggest that we're a business that has some "issues" that need to be acknowledged, confronted, addressed, and solved?  So, let’s get a dialogue going.  But let's first make sure we're all speaking the same language.