So, I'm driving home the other day, listening to "All Things Considered," and hoping to NOT hear a story about Mark Foley, school shootings, or North Korea nukes.  And I was rewarded.

"ATC" did a great story about Sean Lennon's new album, "Friendly Fire."  Now I have no idea whether the album is any good or not, but Sean Lennon makes for a great interview, and Michelle Norris did a great job of asking just the right questions.

It got me to thinking - why don't Rock Radio stations do these types of features and interviews more often?  Instead of the boilerplate questions, this is radio the way we probably all learned in college or broadcast school, but it is rarely the way it sounds today. 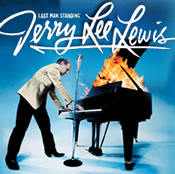 It also occurred to me that Jerry Lee Lewis has a new album out, "Last Man Standing."  It features the Killer playing classics with the likes of Jimmy Paige, Bruce Springsteen, Eric Clapton, John Fogerty, Jagger-Wood, and Neil Young and many others.  I can't tell you I love the CD, but it's an event, and Jerry Lee is a proverbial force to be reckoned with.  He'd probably make a great interview, and I'm sure the folks at Shangri-La Entertainment would be more than happy to hook you up.  They need the pub, and your radio station needs the content.  Instead of talking about what happened on "Survivor" last night, or what Kevin Federline said in "People," why aren't we doing a better job of connecting our listeners to the music?

Isn't this the kind of material we should be featuring on the air, in podcasts, and even on our HD2 channels?  Many stations still conduct artist interviews, but instead of mailing them in, let's learn from NPR and act like these are opportunities to show off our content-creating abilities.  It's the way to cement our relationship with listeners, while providing value for our brands in an increasingly crowded digital marketplace.  We can no longer go through the motions.

Very good one. Why don’t the record company’s bring the artists to Rock Radio like they do in Country? Country radio is VERY involved with the artists.

I have a sense this is more about the record companies willingness than the stations'.