As a PD, how many times has this driven you nuts?  You show up at a station appearance, and your personality is hiding out between call-ins.  Perhaps he's in the van smoking cigarettes with an intern, or talking to that blond who always seems to show up at his events.  As a PD, I placed a great deal of emphasis on the 58 minutes each hour when the jock wasn't making her call-ins.

These personalities are bona fide celebrities in the eyes of their listeners.  It's not an exaggeration to say that when a typical listener meets, shakes hands, and spends a minute chatting with his favorite jock, it's probably the most exciting thing that's happened to them in some time.  It is truly a brush with fame, and something they will talk about at work the next day.

Encourage this behavior from all your personalities - from the weekend jock right up to the morning stars.  If you think it's too much to ask your "players" to step up at the right moment and make your fans truly feel like friends, then take a look at these guys: 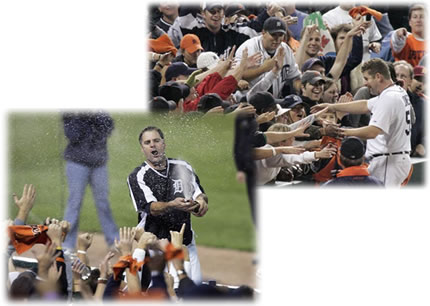 Tiger pitcher Kenny Rogers made $8 million this year.  He's a 41 year-old grizzled veteran who has experienced just about everything in major league baseball.  And his first instinct after the final out in Saturday's AL Division Series winning game was not to drink champagne in the locker room with the owner and the other Tiger players.  Instead, he and the entire team took the party outside, where 45,000 ecstatic fans were going nuts.  Reliever Todd Jones ($5.8 million) dove into the crowd, and he wasn't alone.  Every player on the team shared his experience with long-suffering Tiger fans.  From spraying the crowd with champagne to high-fiving spectators all around the stadium, the Tigers saluted their customers and shared the moment.

If a group of 25 guys with a combined salary of over $80 million can make their fans feel like part of the team, can't your airstaff do the same thing?  Sharing the passion with your audience is part of the entire entertainment package.  Detroiters - and viewers from around the country - will talk about how the Tigers took their celebration to their fans for years and years.

Pay your personalities $8 mill and they'll do what the Tigers did...otherwise, all that you say is the gospel. If they can't do it, find someone who can!

I don't even make ONE million or even 6 Figures & I've always done that! I Go out & Host Benefits for Listeners FREE! I even tell them What radio station I work at when I'm putting the Fire out at their house or Cutting them out of that SMASHED car!
I Ran a Food Drive with my Fire company last weekend too.

Excellent blog, Ralph. You're right on the money.

Hey...I didn't know what you look like until now.
Speaking on behalf of both Fred and myself...what's
with the thick hair?! You could donate 33% of it
to Jacobs and another third to that OTHER chrome-
dome (me) and still look cool. We're waiting! :)