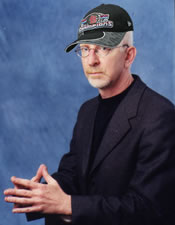 Actually, it's the Detroit Blues, because after a fabulous year and a great post-season, my Tigers succumbed to the St. Louis Cardinals.  You'll note the less-than-happy facial expression as I sport a Cardinals 2006 World Series cap, thanks to an ill-conceived bet with a jubilant Rick Balis.

Interestingly, the Fox TV network is now feeling a lot like me, as this World Series earned the worst overall ratings in 30 years.  That's because neither club - our Tigers or the Cardinals are "major market" teams.  They're far from New York City, California, and "Red Sox Nation."

While some of the ratings softness was indeed due to the fact that neither Detroit nor St. Louis are Top 5 population centers, the other reality is that the country was faced with getting to know each team and its manager as the Series begun.

Part of the problem is that television's fixation on the Yankees, the Red Sox, and the Mets has "taught" the rest of the country that theirs are the only stories worth telling in baseball.  Throughout the season, the "games of the week" and prime time slots were essentially set aside for the New York and Boston teams.

While everyone knows about A-Rod's problems, Derek Jeter's greatness, Johnny Damon's betrayal, and Big Papi's hitting, they had to cram in order to learn about the Tigers' turnaround, the Jim Leyland/Tony LaRussa relationship, and all the other stories that made the Tigers and the Cardinals so compelling.  In St. Louis, it was the frustration of waiting two decades for another championship.  In Detroit, it was the story of how this team singe-handedly rekindled the city's love affair with baseball.  But throughout the year, the headlines were stolen by the more press-worthy Barry Bonds.

None of this should have caught Fox by surprise.  The Tigers were in first place since mid-May.  And the Cardinals have been a contender for most of this decade, having been to the World Series in '04 (only to lose to that year's "team of destiny," the Red Sox).  Each of these teams has great storylines that were told during the games themselves - too late to truly impact the ratings.

Radio stations make the same mistakes.  Becoming overly fixated with Howard Stern became a bad strategy when radio's only "action hero" left the business.  And when that's the only story a station talks about, they're not left with much when the big guy leaves.

What are the "stories" at your station, besides the obvious ones?  What personalities can you build around besides your morning show?  How does the history of Rock in your market create a great storyline that builds the same type of loyalties that sports teams enjoy?

Record labels are now faced with the reality that their only brands are "classics."  Listeners care more about the Beatles, Aerosmith, and Pink Floyd than they do most of the faceless groups that temporarily occupy the charts, only to be replaced by next year's model.  As we all learned on "Behind The Music," every band has a great story, if you take the time and effort to tell them.

So whether it's with your station or that band you're trying to develop, don't make the same mistake we diehard fans make - "Waiting 'til next year."  Tell the stories now, and make sure your radio brand is more than just a one-dimensional logo, but instead, a part of your listeners' lives.