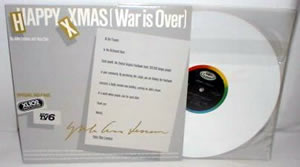 On the way into work this week, I heard WCSX play John Lennon's "Happy Christmas (War Is Over)" and it brought back a memory of Christmas two decades ago that I thought you might enjoy reading about.

I was working for XL102 in Richmond, one of my first "AOR" clients, and the PD was a relentless guy named David Grossman.  David was one of those programmers who did it more with sheer force than with charm.  But he had a vision for the station, and was primarily responsible for XL becoming a force in Richmond radio in the '80s.  The station had a great local staff - Dick Hungate, Paul Shugrue, Dal Hunger, and Rik Maybee were all part of the on-air team that really "got" the Richmond mentality.

David had a dream that he was going to convince Yoko Ono to press a limited series of white vinyl copies of "Happy Christmas."  He had a way into Yoko through a friend or relative, and began to pepper her with letters and calls.  From a distance, I thought that this was a long shot at best - why would Yoko do this for a Rock station in Richmond, Virginia, of all places?

But David was relentless, and eventually convinced Yoko (and Capitol Records) to press these white vinyl 12" limited editions of "Happy Christmas" that benefited the Central Virginia Food Bank.  Suffice it to say, it was one helluva promotion.  No other station - WNEW-FM, KLOS, or The Loop - all the big Rockers back in the day, were able to take part in this, just XL102.

In an interview that took place that year in support of the fundraiser, Yoko was asked what made her finally decide to give "the OK" to press these white vinyl copies for XL.  Her simple response said it all:  "Because no one had ever asked before."

The station raised considerable money, got some incredible local and national press coverage, and in the process, showed me a lot about how one PD can make a difference.  Yes, I have a numbered copy of "Happy Christmas," one of the few pieces of memorabilia that I've kept over the years - a great reminder of the power of a radio station and one programmer's relentless pursuit to think big, and do something special.

Happy holidays to all.