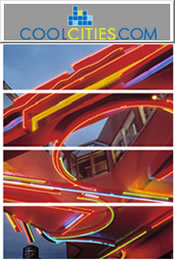 You've heard that line before.  But in this case, "It's a zero sum game" refers to a statement that William H. Frey, a Brookings Institution demographer has made about how cities are now competing for young people.  As Boomers retire in droves, metros are faced with the task of attracting the hottest demographic - 25-34 year-olds - to reside in their towns.

Thus, cities like Austin, Portland, Las Vegas, and Charlotte are actively campaigning for that next generation, while Detroit, New York, and L.A. are faced with trying to keep these young people within their boundaries.

As Frey notes, "These are rare and desirable people."  And the data shows that once they turn 35, they are far less likely to relocate and try a different place to live.  So, if cities get them while they're young and educated, the odds are good that they'll hang around.

But to attract college-educated 25-34s, cities have to be genuine.  If they just try to run obviously targeted ad campaigns, world-of-mouth networking communities will see through these attempts as blatant marketing efforts.  As Atlanta's Chamber of Commerce head, Sam A. Williams, notes, "You can't fake it here.  You either do it or you don't."

This dilemma was a big part of the recent gubernatorial campaign here in Michigan, as the two candidates addressed head-on the issue of the "brain drain," as young people leave the state for Chicago and other perceptually hipper areas.  Governor Granholm even has a "cool cities" initiative, designed to inject Michigan cities with that vibe that makes them attractive to young college grads.

And if you think about it, the terrestrial radio business has the identical dilemma.  Aging Boomers are still reasonably satisfied with AM and FM stations, less apt to invest in iPods, satellite radio, and other technical options.  But, they're moving on, and they aren't being replaced by younger listeners.  Meanwhile, these 25-34s - and their teen counterparts - continue their exodus from terrestrial radio, as they clearly realize that like Detroit, Philadelphia, and Milwaukee, there's simply less for them there.

Big cities and even states have figured it out.  They're hiring consultants, they're conducting research, and they are addressing the problem.  When you look at the mix of cities that are developing "social capital," they aren't just in the Sun Belt region.

Terrestrial radio hasn't even recognized that the youth problem is indeed toxic to the long-term health of the business.  We'd better get moving or music tests are going to look like AARP conventions.