You can look at the proliferation of iPods as both a curse and a blessing.  It's true that on the one hand, all those Apple iPods move users away from radio and toward alternative entertainment sources.  But there is an "other hand."  As a result of the growing legions of consumers walking around with mp3 players on their belts and around their necks, there's a greater need for content.

And that's where Rock Radio - in particular - can make an impact and make some money.  A new Pew study of nearly 3,000 adults shows that podcasting is a rapidly growing activity among web users.  Moving from 7% to 12% in just a few short months, podcasting is especially likely to be a guy thing.  In fact, 15% of the men in the survey have downloaded a podcast, compared to 8% of the women sampled.

Podcasting still isn't part of the Internet habit, as only 1% download one daily.  But as we move through another holiday season, and millions more iPods (and Zunes?) will be sold, there will be a growing need for radio to become better content providers - off our own air - as well as a chance to begin deriving revenue from our efforts. 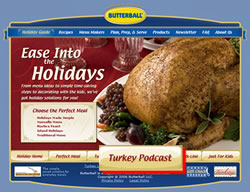 And brands well outside radio have figured it out.  Consider that Butterball put together a series of six podcasts to help Gen Xers figure out how to prepare turkeys this past Thanksgiving.  And for entertainment purposes, there are even some of the funnier moments from callers who dialed up the company's 1-800-Butterball talk line.  Sounds like a morning show "best of," doesn't it?