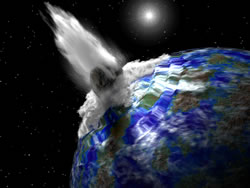 Reminiscent of those great 1950's sci-fi films depicting a meteor headed toward earth, radio operators are facing impending ratings trouble.  And like those movies where disaster seems light years away, this one is going to catch radio by surprise.

The coming calamity involves Arbitron crediting for streaming radio broadcasts.  The good news is that more and more terrestrial operators are providing streams of their AM and FM signals.  A recent J.P. Morgan analysis shows that broadcast stations are capturing a considerably larger share of overall Internet streaming.  It suggests that more than 20% is comprised of radio streams from CBS and Clear Channel stations.  Of all terrestrial broadcast streams, Clear Channel dominates 45% of this activity.

On the one hand, this is good news because Internet audio is the way that AM/FM stations will find their way onto computers, and more importantly, phones, and Wi-Fi in vehicles.

But the "meteor" side of the story is that broadcasters won't get full ratings credit for their streaming activity in Arbitron.  That's because most stations' streams aren't true simulcasts of their terrestrial signals because broadcast commercials cannot be carried on the streams.  Union/talent fees are at the center of this problem, necessitating stations to "fill" commercial clusters with all sorts of superfluous material (mostly unlistenable and clumsy, by the way).

The bottom line is that sometime in 2007, Arbitron will very likely start reporting non-terrestrial listening (satellite, streaming, etc.), and a radio station's Internet stream will have to be listed separately.  It's not an "Arbitron thing," it's the way it has to be done in order for advertisers to truly get what they're paying for.

Meanwhile, imagine picking up an Arbitron book, seeing a 5.5 share for WAAA-FM, and then seeing .7 for WAAA-FMi - or however it will be listed.  It's not going to make broadcasters happy, and worse, it could even discourage some from continuing to provide a stream.

And that would be a tremendous mistake.  Because if you talk with anyone just outside of radioland, they'll reinforce the importance that a strong web presence and an Internet stream has today, and will most certainly have in the immediate future.  Clear Channel, to their credit understand the importance of streaming, and this is one case where emulating their initiatives makes good sense for all broadcasters.  But if an FM station isn't going to get "combined credit" for its stream, there's going to be a lot of indignation.  Sad to say, the better job you've done promoting and establishing your stream, the more you're likely to be hurt.

So, rather than waiting for this "crediting meteor" to slam into our business, thus creating chaos and panic, radio operators can begin to address this problem now.  It may be a complex issue, sorting out rights and talent fees with agencies, but it's a necessity if radio is to truly participate in the digital frontier.

This is clearly a job for new RAB head, Jeff Haley, as well as the captains of industry who head up radio's biggest companies.  It may not be as immediate a problem as first quarter BCF, but it will clearly come back to bite our industry in the rear if it isn't addressed - and soon.

The Arbitron Advisory Council has been all over this, as have other concerned industry leaders.  But to date, nothing has happened.  This is a great time to send this blog - and other corresponding evidence - to your managers, owners, and others who have a controlling interest in radio's future.  Otherwise, we're going to become a bad 1950's sci-fi movie - and another reminder to the media world that radio just doesn't get it.

Fred, what many broadcasters don't know is that this policy is in place NOW at Arbitron. Stations will not get credit for their 'main' AM or FM signal for entries specified as "internet". It's just that the old diary methodology doesn't have an "internet" checkbox so likely a lot of streaming credit still goes to the FM. That will all change with people meters and the new web based diary options (see http://www.arbitron.com/downloads/ediary2.jpg). And unless a stream qualifies for Arbitron's minimum AQH threshold, that listening won't get reported period.

The AFTRA situation is a sticky one as the power to solve that one lies with the primary purchasers of voice talent - namely the ad agencies. And they have little incentive to solve it on radio's behalf.

My suggestion? Radio should adopt a policy that ALL ads purchased on AM or FM broadcasts are included on internet streams unless they are specifically declined by the advertiser or agency. There is no credit or rebate on restricted ads. However, there is a charge for extra internet ads or internet-only ads.

Then work out with Arbitron that any station which adopts this policy should have their streams treated as "true simulcasts" for the purposes of ratings.

This would put the pressure back on the agencies to either pay the freight, cut a better deal with AFTRA, or miss out on a fast growing segment of radio listening - make it their choice rather than radio's burden.

The first tribe of wireless lags behind both the dead tree guys and those FM with pictures folk when it comes to making serious investments online. Our counsel has remained the same for years: the minimum investment in online should equal the total investment in one's morning show. That's head count and dollars. 2007 is shaping up to be the year daily print continues to drive forward and TV stations take online totally "in-house" a radical departure from the previously acceptable (and less expensive) third-party network "plug and play with local news hole" solutions. My sense is as radio once played catch-up to TV in developing vendor dollars (early NTR in the 1980s), smart operators will see the inherent advantages and ROI in making prudent online investments. It's all about LOCAL and there's nothing but upside.