That's a quote from CBS President Les Moonves, from the CES in Vegas this week.  According to Moonves "The days of old media and new media are over.  Now, it's just media."  And the fact that HE'S speaking at the CES, along with Disney's Robert Iger ought to tell us something about how this show has morphed from toys and gadgets to entertainment. 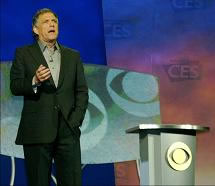 Moonves is right.  The average 15 year-old, or even 25 year-old, doesn't care where he gets his entertainment - he only cares that he's getting what he wants.  The difference that many older folks see in the content's point of origin is lost on this generation that has grown up voting for the winners of their favorite TV shows, watching home-made movie clips on the internet, watched blogs become ubiquitous, decides for themselves when, where, how, and what music they'll listen to or watch, and has more options for entertainment and stimulation than any generation in history.

They don't care if they hear their favorite song on XM, iTunes, Yahoo! Music, or your station - it's all the same to them.  There is no "credibility gap" between these various outlets, so whether it's a friend who told them about it, they saw it on a blog, it was a referral via Amazon, or they discovered it on Pandora - they simply know what they like and what they want.

If there's a theme appearing at this year's CES, it's that the future of technology is clearly about content.  Mike Fasulo, Chief Marketing Officer for Sony Electronics says they should call it "the Consumer ENTERTAINMENT show" as opposed to Consumer Electronics Show.

Make no mistake - gadgets DO rule the roost at CES, but every bit of technology that's being buzzed about and showcased on CNET, CNBC and by Walt Mossberg has one thing in common: it's about getting entertainment content in new and interesting ways.  Steve Jobs' big announcements yesterday at MacWorld underlined this theme - Apple TV and the iPhone are all about different ways to consume and enjoy media entertainment.  From Steve Jobs perspective, the future is every bit as much in your living room as on your hip or your desk.  Or car.

Once that great stronghold of all-things radio, the car has been co-opted by everything from 8-tracks and cassettes to CD players and now DVD players, GPS navigation systems that turn extra duties as photo wallets and mp3 players  - and even provide up-to-the second traffic information (and will re-route you around it) along with weather and breaking news updates.  Then there's Microsoft's and Ford's joint venture called SYNC (more on that in upcoming JacoBlogs).

So...  There are millions of choices for video and audio content.  Hundreds of ways to access them in your home, car, cell phone or mp3 player.  If you're just booking another auditorium test, think again.  Radio competes with all of media, and your ability to break through the options and entertain your local listeners is what will make you different from these choices.  Your station's entertainment value is the key to navigating through all this technology.

But of course, you have to be in the race.  Still not streaming?  Still not providing a quality, consistent stream?  Still don't have your RDS figured out?  The clock isn't ticking - it's pounding.