Living In The D

How can I describe living in Detroit to someone who's never resided here before?  It's a lot like having a lazy, out of work, but loveable, kind-hearted relative move in with you.  They get on your nerves, they make you crazy, but you realize that they're family and in some way, they deserve your help.  So you put up with their mistakes, bad habits, and stupid choices because you realize that deep down inside, there's potential.

Well, this week here in Detroit, thousands of these "annoying relatives" have stormed into town, and have set up camp at the Detroit Auto Show - or as they would love you to call it, the NAIAS (North American International Auto Show).  In whatever clothes they're wearing, it's the same "Big 3" mentality, year after year, trying to figure out why their cars just can't stimulate America's imagination any longer.

A case in point is all the marketing and promotion they did late last year.  If you were watching car ads for the likes of DaimlerChrysler, for example, they were loaded with satellite radio come-ons.  This, of course, coincided with "carpet bombing" ad campaigns from both XM and Sirius, trying to capitalize on holiday spending.

But a new AOL/AP study conducted by Ipsos has been released that belies this "strategy."  In a survey of just over 1,000 Americans that was conducted last month, it turns out that satellite radio barely beats out leather as the option that current car owners (who plan on buying/leasing a new vehicle in the next six months) say they'd like the most.  Here's the list: 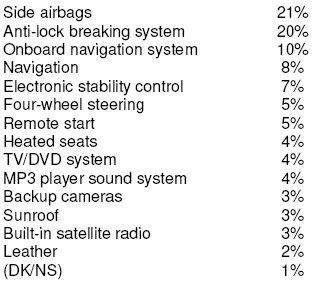 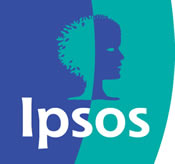 Now granted, satellite has a tough fight up against safety (airbags, ABS, etc.), but isn't choosing the most desirable assets what marketing and advertising is all about?  And look how options like navigation and heated seats are far more desirable at this point than satellite radio.  It makes you wonder what some of the auto companies (and their agencies) are thinking when they "craft" their copy points for their campaigns.

And to lend some credence to this data, Inside Radio reports that retail sales of satellite receivers dropped an average of 39% in October/November.  And Bank of America's Jonathan Jacoby indicates that 4th quarter '06 could be down as much as 40-45% compared to last year when Stern jumpstarted Sirius subscribership. No wonder they're talking merger.

Maybe there's a good reason why you haven't driven a Ford lately.