It is indeed great to see that the Alliance had considerable activity at the Detroit Auto Show (although honestly, like covering a Rock concert, attendees don't always pass through the key visibility points).

If anyone believes in street marketing and "Retail Radio," it's us.  And it looks like there was quite a bit of effort put into the NAIAS.  But it's also Detroit in January, not a time when people are spending much time hanging out on the street.  It would have also helped to have been "in the building" where the real action takes place.

But we're pleased that the NAIAS is on the radar screen for the Alliance, and hopefully, upcoming shows in major American markets will be covered well.  Our goals are the same:  It's critical the Alliance keeps HD Radio very top-of-mind among the auto companies and their execs.

I know you hate to be uninformed... but in this case, you obviously were.

Thanks for the response, Peter.

Here's what Peter shared with us about the HD Alliance's efforts at NAIAS:

In our continuing effort to reach not only consumers, but the automotive executives who make and influence decisions about HD Radio implementation, we made a strong presence at the North American Auto Show in Detroit over the past two weeks (photos below).

Taking a page out of radio’s guerrilla marketing playbook, we had HD Radio orange uniformed street teams (15 people) handing out HD Radio VIP lanyards at the People Mover stations as attendees traveled to the two “industry days” (32,000 auto executives, engineers and employees attend the Auto Show). We handed out 21,000 lanyards which were well received – many people noting they had “heard commercials about HD Radio on their favorite station”. The lanyards invited them to visit HDRadio.com and register for an HD Radio car converter. We will give away 30 converters.

In addition, both last and this coming weekend we took the HD Radio messaging to the streets using 5 two-sided mobile billboards traveling the traffic filled streets of Detroit around Convention Center. At 2:30 each day the trucks caravanned in front of the center making a spectacular site! The mobile billboards carried HD Radio and car specific art and messages including “Drive, Listen Love”, “More free radio in your car”, “New radio stations…. for free”, “More choices than ever on the dial”,  “Love your car… love your radio”.

This was a monumental effort and coordination by Diane Warren and the team from Texas Creative that orchestrated the program for us. 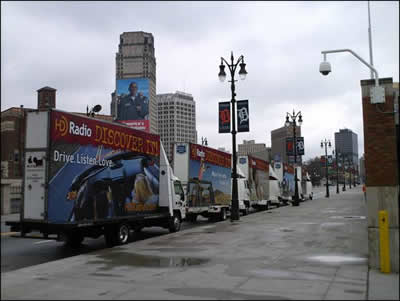 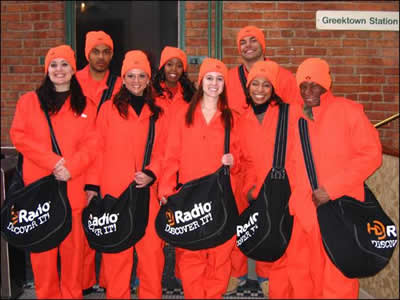 God, the HD Radio marketing, just like the technology itself, is such a joke !

We now know, that 75% of Americans are aware of HD Radio, at some level:

To check interest in HD Radio, versus Satellite and Internet Radio:

Even after a $200,000,000 advertising campaign, by the HD Radio Alliance, the popularity of HD Radio, Satellite Radio, and Internet Radio, are just blips on the screen, compared to iPods and MP3s:

Senator Sununu, may put an end to FCC mandates:

HD Radio/IBOC is a farce - IBOC causes adjacent-channel interference and has only 60% the coverage of analog. The HD channels are only low-bitrate streams of the same old repetitive material, and will eventually, contain commercials.

Peter Ferrara was a stooge at Clear Channel, and he continues to be a stooge for this most stillborn of consumer products. Why doesn't he just form the Cassette Player Alliance? Might be less of a waste of time. HD Radio is an abysmal response to the competitive issues facing people who own terrestrial radio licenses today.

Is there an alliance out there for better content on terrestrial radio? Broadcasters are having trouble competing with new technology because their corporate paymasters are wasting time and resources with HD Radio and sucking up to Congress by promising to throw their talents under the bus if one person complains about content.

In response to "stooge" Peter Ferrera:

“HD Radio on the Offense”

“But after an investigation of HD Radio units, the stations playing HD, and the company that owns the technology; and some interviews with the wonks in DC, it looks like HD Radio is a high-level corporate scam, a huge carny shill.”

“While interest in satellite radio is diminishing, interest in HD shows no signs of a pulse.”

“In other words, Bridge says interest in HD radio is decreasing even as your station works hard to increase awareness. What can I possibly add to this honest and bleak picture that I haven’t said before? My well-intended warnings about HD’s “premature death” seem to be rearing their ugly heads almost two years later.”

“But is ‘availability’ of HD radios the problem?”

“And one broadcaster reported to me that he asked an iBiquity rep how many HD radios had actually been sold as of the most recent accounting. And this was his answer: 150,000.”

HD Radio is a scam that has been a complete failure with consumers and the auto industry. Take the rest of your HD Radio Alliance "stooges" and crawl back under your HD Radio "Pet Rock".

HD 2 Needs to carry alternative programming. Maybe rebroadcasting an internet only station or a format that is not avalible in the local area. If the format is unique enought, people would put up with the bad sound!