A recent Business Week cover story called "McDonalds 24/7" is a great reminder that as another 24/7 business, radio has "customers" at every time of the day or night, too.  As the article points out, not only are there plenty of hungry people at 3 in the morning, but "by focusing on the hours between traditional mealtimes, the fast-foot giant is sizzling."  A franchisee in Garner, NC, for example, has seen his restaurant's revenue rise 4.5% - or $90,000 - over a year, by focusing on late night hours.

That, in turn, reminded me of the Taco Bell campaign called “Fourth Meal,” also known as “the meal between dinner and breakfast.”.  This kicked off less than a year ago because Taco Bell learned that people – especially 18-34s – are eating later.  "Nearly half of all males 18 to 29 and nearly a third of all males 30 to 39 are eating after 7 p.m. every night," according to the Taco Bell press release.  And the Federal Government reports that nearly one in ten Americans starts work between 4 p.m. and midnight, and another 7% between midnight and 6 a.m.  Undoubtedly, some markets that are "shift towns," like Detroit, have even higher percentages that work nights, thus necessitating late night meals. 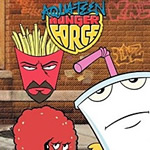 The Cartoon Network – over and above the recent attention for “Aqua Teen Hunger Force” – has pulled great numbers for its "Adult Swim" programming that doesn’t even start until 11 p.m.  In January 2007, it broke its own ratings records with Adults 18-34 and has been number one with Men 18-24 for nearly two years straight.

And yet radio – a 24/7 business if there ever was one – has essentially tossed aside overnights.  These hours are "throwaways," and more often than not, stations operate like voice tracked jukeboxes during this time.  At the risk of pining for the “old days,” consider some of the people who got their starts in the overnight  – the great Alison Steele at WNEW, Pierre Robert at WMMR, Brother Wease at WCMF, Yvonne Daniels at WLS, Gary Meier (of Steve & Gary fame) at WLUP, and the late Unkle Roger also from WCMF.  In fact, most of the truly great personalities got their starts in the wee hours of the morning, in unrated dayparts when very few were listening.

That rarest of all species – the overnight jock – may be a vestige of the past.  But he/she represents a lost opportunity for many stations to build that farm team that will fuel radio's future.  Nearly one in five people is awake during these hours, and yet radio’s response is to play lousy new songs during these hours, hosted by a recorded, disembodied voice that brings very little to the station.

We’re all well aware of the cost savings that has dictated no live talent in overnights, but it’s another sign of short-sightedness, combined with missed opportunities that slowly chip away at what made radio so dynamic, exciting, informative, and compelling no matter what time of day it was.

Bill: THANK YOU! Let's not forget the next step in talent development - weekends.

And while you make this comment, any "daypart" on HD2 channels is a jukebox, sometimes with only an ID drop-in every 7 or so songs. Just another place to develop talent.

One day radio will realize the lack of investment will end up making the station completely talentless...then what?