Jacobs Media has a long, rich history in Philadelphia.  I hooked up with Ken Stevens and Andy Bloom in the late '80s when we took YSP Classic Rock and became the first Howard Stern affiliate.  Throughout the '90s with Tim Sabean, YSP was always successful, hitting #1 12+ at one point, even while moving from Classic to Active Rock.  At the same time, market legend WMMR often suffered during this period, vacillating through a variety of different Rock permutations.  Yet, while MMR struggled, I always looked longingly at the station, especially their incredible jock, Pierre Robert.

A few years ago, I was fortunate enough to join Greater Media in Philly, and finally get the chance to work with WMMR.  It's been a great ride, thanks to some incredibly talented folks at the station.  MMR has come all the way back, and dominates the Rock market today.  And throughout it all, Pierre has been the guts and glue of the station.

He has had an amazing run, and this past year was very special for him.  Pierre celebrated 25 years with MMR, and has been featured on just about every media outlet in Philly.  Recently, he signed a contract extension that will keep him on the air at MMR for many years.

So with all this history and all these accolades, you wouldn't blame the guy for kicking back a bit.  But that's not the way he works.

I was in Philly this week, monitoring the market.  Of course, I happened to be there on a record cold day, school start times were delayed, and the temperature was about 4 above zero when Preston & Steve went on the air, promising free coffee to the poor local working stiffs, forced to labor outdoors.

And MMR's coffee server?  None other than Pierre Robert.  "Pierre's Coffee Caravan" was set up a couple of blocks from my hotel, and I just had to see it for myself.  At 8 a.m., I bundled up as best I could and shivered to the construction site.

Was Pierre warming up in the van while interns and the Bod Squad poured coffee?  Of course not.  He was in the middle of the action, welcoming his hard hat "citizens," and plying them with hot cups of joe.  Here is one of the most prominent Rock jocks in all America, braving the cold, and hanging out with construction guys because that's what Philly was all about on this day. 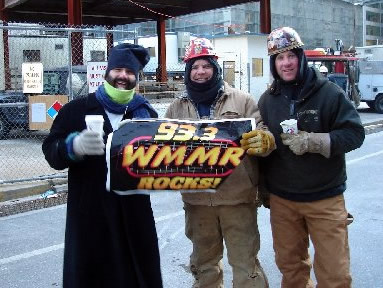 You had to be there.

What a classy move.

Too often in our business, we forget the source of our success-- THE AUDIENCE!

best damn jox in america! i have loved him and hung out with him from my days in philly and atlantic city