JacoBlog - Jacobs Media's Blog: It's Not What You Say...

« The Threat To Internet Radio | Main | Where's The Outrage? » 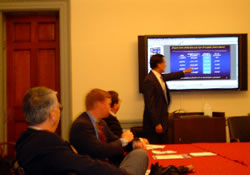 The big political buzz on the Republican side is coming from Mitt Romney.  He recently spoke at the Detroit Economic Club and wowed the room because he used a PowerPoint presentation rather than just standing there and orating.

None of the other candidates uses this revolutionary Microsoft tool, thus giving Romney a distinct edge over his competition.  As one auto exec was quoted from the Detroit speech, "It was amazing.  I mean he didn't make claims.  He had the graphs to back him up."  And as campaign spokesman Kevin Madden pointed out, PowerPoint presentations "speak to the competency that (Romney) exudes and the authoritative nature of his understanding of the issues."

What does this say about the current political arena?  Here are a bunch of 50+ guys running around the country, trying to win the vote, and the candidate that uses a piece of software that is used to train McDonald's managers and aspiring Hooters girls; and that you see in every hotel meeting room in the country, ends up looking smarter and more advanced than the rest of the pack.  You knew that when George Bush talked about "the Internets" we had a problem.  It probably made a lot of people wish for Al Gore.  At least he knows how to pronounce it, given that he invented it.

At Jacobs Media, we started utilizing PowerPoint in our market visits back in the late '90s, and to this day, it is a valuable tool that has helped make our presentations more effective, organized, and memorable.  But this is far from new technology, and the guy (or gal) who ends up sitting in the White House ought to have considerably more knowledge and competence when it comes to technology and communication.

But of course, that applies to all CEOs of companies all over the U.S. and the world.  Technology is profoundly changing industry after industry, and yet, it's often difficult for the grizzled vets of the corner offices to totally grasp its implications.  And because most of these captains of industry did not come up from the tech side, it must be especially difficult to get their arms around these changes, and what they portend for the future.

For Mitt Romney, a simple PowerPoint presentation with graphs and charts is separating him from John McCain, Rudy Giuliani, Sam Brownback, and the rest of the pack.  Hopefully, he'll stay away from some of those wild "boomerang" custom slide show effects as he crafts his strategy for the future.  Wonder if he knows about laser pointers?

Mitt Romney is leading the GOP pack because of his use of PowerPoint at a meeting in Detroit? That's funny.