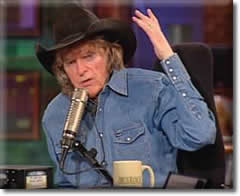 The news that Don Imus was fired by CBS is no more surprising than the upcoming announcement that Alberto Gonzales will no longer be Attorney General.  It's just a matter of time.  By now we all "get" the news cycles. We can see very clearly where these things are headed.  It just seems like there's a certain inevitability to the way that things cascade in our media-crazed world.

As the Imus controversy has unfolded over the last several days, I have found myself going back and forth on what is right and what is wrong.

On the one hand, Imus is one of hundreds of terrestrial radio jocks who regularly make jokes about people's ethnicity - or sexual preference.  He's just on a bigger stage.

On the other hand, Gwen Ifill's column in the New York Times this past week was a poignant reminder about the damage and impact these types of "jokes" have on their intended victims.

Yet, Rap and Hip-Hop stars often use language and images on their videos that are far more graphic.  And who appointed Al Sharpton the judge of Imus' fate?  And who advised Imus to bother going on his show?

And on the other side, the Rutgers women's basketball team deserves better than having to endure this.

Meanwhile, Chris Rock does what he does.  And Bill Maher's "Real Time" is a lot like Imus' show - heavy duty political figures in a more relaxed environment, coupled with lots of graphic language and imagery.  The difference, of course, is that it's on HBO.

So, the debate will rage on.  And passionate people on both sides of this issue - fans of Imus who feel he got hosed and those who are outraged by his words - will continue to make their case on talk shows, news networks, and in bars all over the U.S.

One thing I know - terrestrial radio has just lost another star that it cannot replace.  And that's a trend that continues.

I also wrestled pretty heavily from the ethical
and philosophical points of view. First of all--
I thought a "shock jock" was EXPECTED to shock.
What would have been the result if Stern had
said these same words while still on terrestrial?
I vote that things quickly would have settled down.
You know: "That's just Howard". And I count myself
amoung the 50 million Americans (Arbitrary number I
just picked) who are sick of seeing Jesse Jackson
play Tonto to Al Sharpton's Lone Ranger...or the
other way around. They seem to take turns hogging
the camera when something racial even a thirtieth
this grievous occurs. (Lucrative little cottage
industry they long ago carved out.) Having said
that...Imus KNOWS he slipped or he wouldn't have
admitted to as much. It just came out, and that
shows the deadly power of one verbal miscue.
Downright frightening! He well remembers how
for YEARS D.C's "Greaseman" was ex-communicated
for racial slurs. But even he got three chances
(yep, that's right) before they finally yanked
his mic cord. Which leads me to agree...which I
rarely do...with Rosie O'Donnell...who warns of
"the thought police" approaching. But then I
mentally retrench and imagine how terrible the
Rutgers team must have felt. First to lose...
then to have sand rubbed into the fresh wound
by some pasty-looking old geezer just in a studio
just a few miles away. To sum up...it has gotten
to where you can get away with references to
bodily functions and body parts (which many
find highly offensive) but you cannot make a
joke about race or religious affiliation UNLESS
you yourself are in that group. So Seinfeld
could make all the anti-semitic jokes he wants,
but not Mel Gibson. George Mendez could cut to
the quick his OWN people and their hilarious
indiosyncracies (every group has its share)
but if Mark and Brian tried it they'd be burned
in effegy. In short, you won't be hearing ANY
references to race from morning guys starting
YESTERDAY...from the giants like Mancow to the
dude making $26,000 in Paris, Kentucky. A
take-down this huge will be looked back upon
as a major litmus test...a line in the sand.
I feel sorry for Imus because he slipped ONE
friggin' time. And he immediately took
ownership of the error...was a pro about it
and even went on ever-the-opportunist Sharpton's
program. Yet, that wasn't enough. Nobody would
stop until the poor guy's whole career was
destroyed by one sentence. I'm not really
trying to give Imus a pass here. But when
you step back and look at it rationally...I
mean, HE WAS VERY CONTRITE and deeply sorry.
Again, the result of this will be morning
shows that are even more sanitized and
PC...even coming from so-called "shock" jocks.

I couldn't tell you the last time I listened to Imus and have never really been a big fan. But in this case, I stand behind him - or actually his concept - simply for making a comment, realizing he offended people, and apologizing.

After Janet's little exposure a couple of years ago, radio started getting scared. The clamp tightened. And now it will even more. Not only on content, but also making budget now that a number of advertisers have dropped Imus stations and his home station now has the challenge of finding a way to make up for all the millions that Imus' show delivered.

Remember, after the FCC went after all the CBS stations that carried that Super Bowl, it said it was going to review radio content. But it hasn't...until very soon.

Radio should know what the boundaries of FCC rules are and play in that playground. If one starts climbing the fence, tell them to get down and reinforce the rules. But it is far better than just having everyone sitting in the sandbox in the middle of the playground.

Now to expand the concept, I am totally offended by Dick Hungate's use of the word "friggin'." As such, I demand he be fired or I will take all of Jacobs' revenue-generating clients away from him!

I had a senior moment in my blog entry above, and
the Latino comedian I intended to reference is
Carlos Mencia...who has built a huge career on
poking fun of his own race.

Right on, Fred--I even gave you some 'link love' on this today: http://www.infinitedial.com/2007/04/stupid_dj_tricks_and_conventio.php