« "Everybody Has A Camera" | Main | Streaming Advisory » 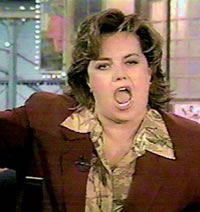 The news that ABC is not renewing Rosie O'Donnell shouldn't come as a "shock" to anyone.  As media pundits have pointed out, she has essentially played the role of "shock jock" on "The View."  Not unlike what Howard Stern brought to radio, Rosie's outrageous comments about religion, politics, and of course her war with Donald Trump got viewers talking, while driving the ratings higher.

But as the media world changes, getting great Nielsen numbers isn't the whole deal.  Maybe it's about enraging advertisers, or the network's executives worrying what a loose cannon like Rosie is liable to do or say next.

The implications of a more sanitized approach to talk and entertainment are clear.  In spite of how "shock jocks" are depicted by special interest groups and "concerned citizens," the fact is that consumers listen and watch.  Howard Stern was compelling and Rosie was shocking.  You couldn't take your eyes off Dennis Rodman.  And John Daly continues to draw attention even with commercials that he makes.  These people are the flavor that makes media consumption fun and interesting, while giving us something to talk about.

It's about conflict, and that's what Rosie represented on "The View."  We relish confrontation and the media battles that perhaps take our minds off of some of the bigger issues of the day, like the Iraq war or the cost of gasoline.  This is why wrestling, NASCAR, and major sports are what America talks about.  We love competition, rivalries, and knocking heads whether on the gridiron or in a studio.  Barbara Walters will get more sleep at night with Rosie out of the picture, but her ratings are going to head south.

Scratch another high-profile talent from the ranks of terrestrial television.  It won't be long before the only really edgy stuff will be on HBO, Showtime, and satellite radio.