Talk About A Revolution!

As if the news in the record industry wasn't already bleak enough (so far this year CD sales are off a whopping 17%), one of Classic Rock's true icons, Paul McCartney just signed a new deal that ended his relationship with Capitol Records after a stunning 43 years.  Who did he sign with?  Amazingly -- and in a real sign of the times -- he signed with a label called Hear Music.  Who owns this label?  None other than Starbucks. 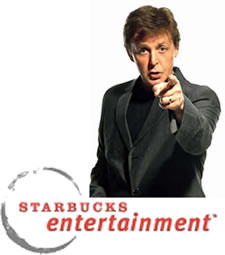 McCartney appeared at the meeting to announce the deal via satellite from London, and said his move reflected the challenges facing the ailing record business as acts look for innovative ways to sell CDs in the face of competition from Internet piracy and rival forms of entertainment, like video games.  And why not Starbucks?  Even though CEO Howard Schultz recently lamented that perhaps with 13,000 stores planned by year's end the brand was being watered down, that's 13,000 places where the McCartney CD will be available.

In the past Starbucks has unearthed early recordings from artists like Sergio Mendes, Ray Charles, and Bob Dylan, but this is an established legend that will be releasing a CD of all new material.  As conventional CD shops like Tower close shop, lifestyle concepts that bring something new to the listening table, as Hear Music does, are rising from the ashes of perpetually falling compact-disc sales.  If you can't move a $12 CD, a $3 cappuccino with a $5 brownie will have to do.

And the timing couldn't be better.  It's taken as little as 60,000 to 65,000 units sold in a week to vault a CD to the top of the charts recently.  Even though it's worth noting that the CD will still be sold through traditional retail outlets as well, if each of the of 9,400 Starbucks locations currently open sold one CD every day for a week that would be enough to probably propel it to the #1 position.  Given that American Idol has created more stars than the beleaguered record industry, anything's possible.

The good news for radio?  The Starbucks rep brings lattes for everyone!

...and when Paul tours after his album, Starbucks will serve latte in the arena's corridor and during the show, someone in the crowd will yell, "May I call?" and Paul will say "Yes," resulting in a request. Oh, and when you make my latte, grande size with an extra shot of espresson with 2% milk, please.